Hurricane Nicole made its first landfall just south of Vero Beach in Indian River County around 0300 EST this morning, crossing the State of Florida, through the north end of Polk County and Pasco County, exited the west coast in northern Hernando County around 1300 EST, and made a second landfall in Dixie County near 1600 EST this afternoon.  Nicole is expected to continue its northwest track and cross into Georgia late this evening.  Nicole time as a tropical system is expected to come to an end tomorrow as it merges with a trough by the end of the day on Friday. 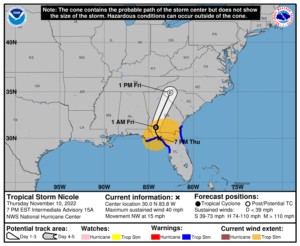 “The center of Nicole briefly emerged over water north of Tampa around 18Z and is now straddling the coast of the Florida Big Bend region northwest of Cedar Key. An earlier scatterometer overpass showed winds of about 40 kt west of the center over the Gulf of Mexico, and this is the main basis for the initial intensity of 40 kt. Surface observations indicate that the central pressure has risen to near 990 mb. In addition to weakening, the 34-kt wind radii associated with the storm have decreased, particularly in the northeastern quadrant. This has resulted in significant changes to the warnings with this advisory.

The initial motion is now 315/13, and this motion is expected to persist through this evening with the center moving into the eastern Florida Panhandle. Subsequently, a low- to mid-level ridge to the northeast of Nicole should move farther eastward as a deep-layer mid-latitude trough and associated surface cold front are approaching from the west. This evolution should cause the storm to turn northward tonight over Georgia, followed by a faster motion toward the north-northeast on Friday. The new forecast track has only minor adjustments from the previous track.

Little change in strength is expected until the center moves farther inland tonight. When that happens, Nicole should weaken to a depression over Georgia. On Friday and Friday night, the system is expected to become post-tropical and be absorbed by the large mid-latitude weather system.”

Due to the demobilization of ARES groups of three counties, the ARRL West Central Florida Section ARES Alert Level will be discontinued.

This will be the last WCF SECTION SPECIAL BULLETIN for Tropical Storm Nicole.