At 1700 EDT, the National Hurricane Center began issuing advisories on Potential Tropical Cyclone #1.  This is the remnants of a eastern Pacific hurricane that crossed Central American and are now emerging into the southeastern Gulf of Mexico from the Yucatan Peninsula.

Maximum sustained winds are near 35 mph (55 km/h) with higher gusts. The system is expected to become a tropical depression later tonight or on Friday and a tropical storm late Friday or Friday night.

The estimated minimum central pressure based on surface observations is 1003 mb (29.62 inches). 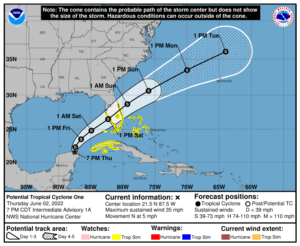 A Tropical Storm Watch is in effect for…
* West coast of Florida south of the Middle of Longboat Key
* East coast of Florida south of the Volusia/Brevard County Line
* Florida Keys including the Dry Tortugas
* Lake Okeechobee
* Florida Bay
* Cuban provinces of Matanzas, Mayabeque, Havana, Artemisa, Pinar del Rio, and the Isle of Youth
* Northwestern Bahamas

“Satellite imagery, surface observations, and reports from an Air Force Reserve Hurricane Hunter aircraft show that a broad low pressure area is centered over the northeastern part of the Yucatan Peninsula of Mexico. This system is currently producing poorly organized convection in the northeastern quadrant due to the effects of 20-30 kt of southwesterly vertical wind shear. The central pressure is near 1003 mb, and earlier scatterometer data showed
winds near 30 kt well to the east of the center. Due to the possibility that the system could become a tropical storm with impacts in the Florida Keys, and portions of the Florida Peninsula and western Cuba, advisories are initiated on Potential Tropical Cyclone One with tropical storm watches issued for those areas.

The initial motion is 360/3. The system should turn northeastward during the next 12-24 h as it encounters the southern edge of the mid-latitude westerlies, and a general northeastward motion should continue through the end of the forecast period. The guidance is in good agreement that the system should cross the Florida Peninsula on Saturday. It should be noted that the guidance suggests the possibility that the center could re-form due to convective bursts, which would cause jumps in the track superimposed on top of the general northeastward motion.

The intensity and structure forecasts for this system are very uncertain. It has a large envelope and a large radius of maximum winds, and a combination of moderate to strong shear and interaction with an upper-level trough seem unfavorable for significant development over the Gulf of Mexico. The guidance does suggests slight development despite the hostile conditions, so the intensity forecast calls for the system to become a tropical depression in about 12 h and a tropical storm in about 24 h. However, these winds are likely to be well removed from the center. Interaction with a mid-latitude trough could allow some additional strengthening over the Atlantic, and this is reflected in the intensity forecast. Regardless of development, widespread heavy rain will occur over
portions of western Cuba, the southern Florida Peninsula, the Florida Keys, and the northwestern Bahamas in association with this system.”

At the present time the following counties or portions of counties have a Tropical Storm Watch in effect:  Charlotte, Desoto, Hardee, Highlands, Inland Manatee, Polk, and Sarasota Counties.

At the present time, there have not been any requests for services from any of the ARES groups in the ten counties in the ARRL West Central Florida Section.

The next WCF SECTION SPECIAL BULLETIN on Potential Tropical Cyclone #1 will be issued following the 1700 EDT advisory unless conditions warrant an earlier issuance.