At 1100 EDT today, the National Hurricane Center could not find a closed center of circulation and declared Fred to no longer be a tropical cyclone.  However, they are reasonably confident it will re-obtain tropical cyclone status sometime in the next 24 hours.

At 500 PM EDT (2100 UTC), the remnants of Fred were located near latitude 24.0 North, longitude 84.6 West. The remnants are moving toward the west-northwest near 13 mph (20 km/h). A motion toward the northwest is expected tonight through Sunday night, with a turn toward the north expected on Monday. On the forecast track, the system will cross the southeastern Gulf of Mexico tonight, cross the central and northern Gulf of Mexico Sunday and Monday, and move inland along the northern Gulf coast Monday night. 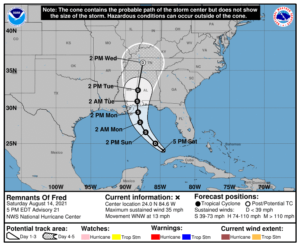 There are no coastal watches or warnings in effect.

Interests in the northern coast of the Gulf of Mexico from Mississippi to the central Florida Panhandle should monitor the progress of the remnants of Fred. Watches and warnings could be required for portions of this area tonight or Sunday.

“Satellite imagery this afternoon shows that a broad and elongated circulation has formed in association with the remnants of Fred, and that the convection has become more concentrated at the east end of the elongated center. However, neither the circulation nor the convection are organized enough to justify calling the system a tropical cyclone at this time. An Air Force Reserve Hurricane Hunter aircraft is scheduled to survey the remnants of Fred this evening to see how far the re-development has progressed.

The initial motion is a still very uncertain 300/11. The system is expected to move northwestward around the western periphery of the subtropical ridge, with a turn toward the north expected as the system nears and moves inland along the northern Gulf coast in 48-60h. The forecast guidance remains in good agreement on this general scenario and the new NHC forecast track is close the the consensus models. However, some adjustments to the track forecast could occur depending on where the center of Fred re-forms. Therefore, users should not concentrate on the details of the forecast track, which
could change quite a bit during the next day or so.

The global models are now in better agreement that the upper-level trough over the eastern Gulf of Mexico that has been hindering the development of Fred will move northward and weaken during the next 24 h. They also indicate that Fred is likely to re-form a well-defined closed circulation over the eastern Gulf of Mexico Sunday morning. Thus, the intensity forecast now calls for Fred to regain tropical cyclone status in about 12 h, followed by gradual strengthening until landfall in a less than ideal upper-level wind
environment. After landfall, the system should weaken and dissipate between 96-120 h. The new NHC intensity forecast follows the overall trend of the intensity guidance.

Although no coastal watches or warnings are currently in effect, the National Hurricane Center will continue 6-hourly advisories on the remnants of Fred in anticipation of re-development. Watches could be required for portions of the northern Gulf coast tonight,
and warnings may be required on Sunday.”

At this time there are no watches or warnings in effect for the ARRL West Central Florida Section or the entire State of Florida.

Several ARES Groups stood down today from stand by status.  Once final confirmation is received that all ARES groups have stood down, we will return the Section ARES Alert Level to No Alert.  It is possible that some ARES groups may remain at a stand by status due to slowly increasing threat from Tropical Storm Grace.   Note:  The Section ARES Alert Level simply reflects the activation status of local ARES groups in the ARRL West Central Florida Section.  Each ARES groups activates at the request of their served agencies and or in accordance with their local ARES plan.

This will be the last WCF SECTION SPECIAL BULLETIN on the Remnants of Fred, unless the threat to the Florida peninsula significantly increases.

WCF SECTION SPECIAL BULLETINS could commence on Tropical Storm Grace either tomorrow or Monday 8/16/21, depending upon the forecast track.