At 500 PM EDT (2100 UTC), the center of Tropical Storm Fred was located near latitude 18.9 North, longitude 71.0 West. Fred is moving toward the west-northwest near 15 mph (24 km/h), and a general west-northwestward motion with a decrease in forward speed is expected to continue for the next two days or so. On the forecast track, the center of Fred is expected to be over Hispaniola for the next several hours, move near the Turks and Caicos Islands and the southeastern Bahamas on Thursday, and move
near or north of the northern coast of central Cuba Thursday night and Friday.

Maximum sustained winds are near 40 mph (65 km/h) with higher gusts. Fred is expected to weaken to a depression tonight as it crosses Hispaniola. Slow re-intensification is expected beginning Thursday night.

Tropical-storm-force winds extend outward up to 60 miles (95 km) mainly to the northeast of the center. The estimated minimum central pressure is 1007 mb (29.74 inches). 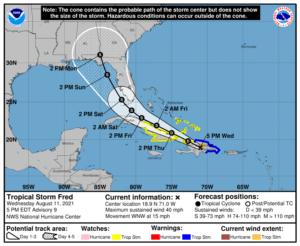 A Tropical Storm Watch is in effect for…
* Martinique and Guadeloupe
* Dominica
* Puerto Rico, including Culebra and Vieques
* U.S. Virgin Islands
* Dominican Republic on the south coast from Punta Palenque eastward and the entire northern coast to the Dominican Republic/Haiti border.

“During the past several hours, the center of Fred has moved inland over the Dominican Republic. The storm continues to produce an area of convection near and southeast of the center. However, the low-level circulation is losing some organization as it passes over mountainous terrain. There have been no observations near the center recently, so the initial intensity of 35 kt is based mainly on weakening from the previous over water intensity.

The initial motion is a somewhat uncertain 290/13. Some erratic motion is expected during the next 12 h or so as the center moves over the mountains of Hispaniola. After reaching the water, the cyclone is expected to moves west-northwestward on the south side of the subtropical ridge through about 60 h. After that, a northwestward motion is expected through the end of the forecast period as Fred moves toward a weakness in the ridge. The track guidance becomes a bit divergent during this time, with the ECMWF, Canadian, and HWRF models showing a track near or over the Florida Peninsula, while the GFS, UKMET, and HMON models show the center passing south and west of the Florida Keys, followed by a more northward motion over the Gulf of Mexico. The new forecast track is between these extremes, and it has only minor adjustments from the previous NHC track.

Fred is expected to weaken to a depression over Hispaniola during the next 12 h. Once back over water, the cyclone is expected to be in a moderate westerly shear environment through at least 60 h. Due to that, and the uncertainty in how well organized the system will be after crossing Hispaniola, the intensity forecast shows only modest intensification during this time. After that time, the global models forecast that an upper-level trough over Florida will gradually move to the north, with an large upper-level anticyclone following near or to the southeast of Fred. How close this anticyclone gets to Fred will determine how much the shear decreases while the system is over the eastern Gulf of Mexico, and the global models are not in great agreement on this. The GFS and Canadian keep the high far enough to the east to expose Fred to southwesterly upper-level winds, while the UKMET and ECMWF move it closer to the storm. The intensity forecast will show a slightly faster rate of strengthening after 72 h to match the guidance and the previous forecast. However, there is lower than normal confidence in this part of the intensity forecast.”

At the present time, there are no watches or warnings in effects for the State of Florida and the ARRL West Central Florida Section.