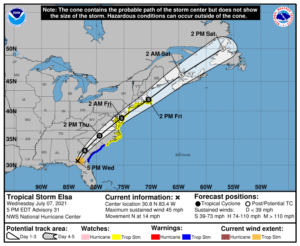 A Tropical Storm Warning is in effect for…
* Mouth of St. Marys River, Georgia to Little River Inlet, South Carolina

“Surface synoptic data indicate that the center of Elsa has moved into extreme southern Georgia and, assuming continued weakening since earlier today, the maximum winds are estimated to be 40 kt.  This may be a generous estimate of the current intensity since no
surface observations of sustained tropical-storm-force winds have been recently received. Elsa should weaken into a tropical depression on Thursday. By early Friday, the dynamical models show some restrengthening of the cyclone as it moves along the Mid-Atlantic coastline. However, the simulated satellite imagery from the global models at that time depict the system resembling a frontal cyclone, so it is dubious as to whether Elsa will be
completely tropical in 48 hours. Due to the uncertainty as to when extratropical transition will occur, tropical storm watches have been issued for Long Island and portions of southern New England at this time.

The initial motion is northward, or 010/12 kt. Elsa is forecast to turn north-northeastward overnight as it moves around the northwestern periphery of an Atlantic subtropical ridge while accelerating northeastward ahead of a broad mid-level trough over the eastern United States and Canada on Thursday. The official forecast is about the same as the previous one and closely follows the multi-model consensus.”

The ARRL West Central Florida Section ARES will return to No Activation level at 1800 EDT this evening, due to the deactivation of Hillsborough County ARES/RACES and Pinellas County ARES/ACS.  Note: Section ARES Activations Levels are simply alert messages, as each ARES group is responsible for his own level of activation.