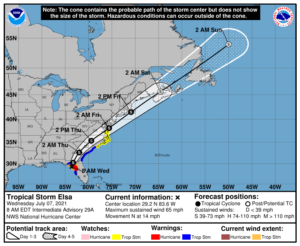 A Storm Surge Warning is in effect for…
* West coast of Florida from the Middle of Longboat Key to the Aucilla River, including Tampa Bay

A Tropical Storm Watch is in effect for…
* North of Little River Inlet, South Carolina to Chincoteague, Virginia
* Pamlico and Albemarle Sounds

The following excerpt is from the Forecast Discussion issued at 0800 EDT today:

“The central convection associated with Elsa dissipated for a time earlier this morning, although the latest radar and satellite imagery shows a new band forming in the northern semicircle. This decrease was likely caused by a combination of shear and dry air
entrainment, and it has caused the cyclone to weaken. Aircraft and surface observations indicate the central pressure has risen to near 1004 mb, and the initial intensity is decreased to a possibly generous 55 kt based on aircraft and Doppler radar data.

After a slight jog to the left, the storm has resumed a motion of 360/12. This motion should continue for the next 12 h or so until landfall occurs across the northwestern Florida peninsula.  Thereafter, a gradual turn toward the north-northeast is expected
by, followed by acceleration toward the northeast as Elsa moves into the mid-latitude westerlies. The forecast guidance has shifted a little to the left since the last advisory, and the new forecast track is also nudged in that direction. The new track lies a little to the right of the various consensus models.

While little change in strength is forecast before landfall, there is a chance that the new convection could cause a short-lived re-intensification. So, based on this possibility a hurricane warning remains in effect for portions of the west coast of Florida. After landfall, Elsa should weaken as it crosses the southeastern United States, followed by some re-intensification as it accelerates back over the Atlantic. The system is expected to
become extratropical by the time it reaches the Canadian Maritimes in 72 h. The new intensity forecast is at the upper edge of the guidance envelope and has only minor adjustments from the previous forecast.”

In the ARRL West Central Florida Section, all Hurricane Warnings have been discontinued.  A Tropical Storm Warning and Storm Surge Warning are in effect for Pinellas, Hillsborough, Manatee, and Sarasota Counties.  The Tropical Storm Warning for Charlotte County has been discontinued.  A Flood Warning is in effect Hardee, Desoto, Manatee, eastern Sarasota, and eastern Charlotte Counties until 1500 EDT today due to excessive rainfall.  Flood Warnings are in effect for several rives in Hillsborough, Manatee, and Sarasota Counties until Friday evening. A Flood Watch is in effect for all counties in the ARRL West Central Florida Section until 1400 EDT today.

All ARES, ACS, and CERT personnel should monitor their email and phones for any requests for assistance from their served agencies through their respective chains of command.  Please do not self-activate as requests for assistance and or mutual assistance must follow through the proper procedure.  Everyone is highly encouraged to continue to check each advisory issued by the National Hurricane Center in Miami and any advisories or Hurricane Local Statements issued by the National Weather Service Office in Ruskin.

The next WCF SECTION SPECIAL BULLETIN will be issued around 1800 EST this evening, following the 1700 EDT advisory on Tropical Storm Elsa, unless conditions warrant a sooner release.