As of 1700 EDT the center of Elsa was about due west of Naples in Collier Count or about 155 south-southwest of Tampa.  The forecast path has had no significant changes since the last bulletin this morning. Elsa is now moving north between low pressure in the northeast Gulf of Mexico and the periphery of the upper level subtropical ridge that is over the western Atlantic off the east coast of Florida.  Please note as Elsa moves north, it will draw closer to the Florida west coast (because the coastline runs slightly north to northwest) but is not predicted make landfall until tomorrow morning in the big bend area in the proximity of Levy or Dixie Counties.   The primary impact to the coastal counties ARRL West Central Florida Section will be from storm surge, tropical storm force winds, perhaps some low end hurricane force winds in Pinellas county.   The primary impact to the inland counties of the ARRL West Central Florida Section will be possible tornadoes and flooding due to excessive rain especially near rivers. 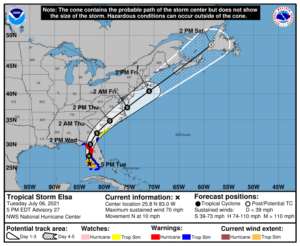 A Storm Surge Warning is in effect for…
* West coast of Florida from Bonita Beach to the Aucilla River, including Tampa Bay

A Hurricane Warning is in effect for…
* Egmont Key to the Steinhatchee River, Florida

A Tropical Storm Watch is in effect for…
* North of Altamaha Sound, Georgia, to South Santee River, South Carolina

“Elsa’s overall cloud pattern has changed little in organization since earlier today. There continues to be minimal shower and thunderstorm activity over the western semicircle of the circulation, with some bursting of deep convection near and east of the estimated center. A slightly-elevated observing site on Sand Key, near Key West Florida, recently reported a peak 1-minute wind of 49 kt with a gust to 56 kt. This supports the current intensity estimate of 50 kt. Recent WSR-88D Doppler velocities from the Key West radar suggest that the storm could be a little stronger than that. The Air Force Hurricane Hunter mission into the storm has been delayed due to bad weather at the Keesler base, but is
rescheduled to investigate Elsa in a few hours. This flight should provide updated information on the intensity of the system.

Recently, the storm has been moving a little slower toward the north-northwest and the initial motion is about 340/9 kt. Elsa should move generally northward today and tonight between the western periphery of a subtropical ridge and an area of low pressure over the northwestern Gulf of Mexico. A gradual turn toward the north-northeast should occur on Wednesday as the system moves along the northwestern periphery of the ridge.  Thereafter, the cyclone is expected to accelerate northeastward ahead of a trough over the eastern United States and eastern Canada.  This will take the system across the southeastern United States within the next couple of days, near the coast of New England in about 3 days and near or over Atlantic Canada in 4 days or so. The official forecast is nearly the same as the previous one and, again, very close to the model consensus.

The environment over the eastern Gulf of Mexico is not ideal for strengthening, with moderate westerly shear and some dry mid-level air. However, upper-level divergence ahead of a trough over the east-central Gulf could result in some intensification of the
system during the next 12-24 hours. The official forecast continues to show the cyclone nearing hurricane strength while it approaches the north Florida Gulf coast, but this is at the high end of the numerical intensity guidance.”

As of press time, two ARES Groups have been partially activated:

The next WCF SECTION SPECIAL BULLETIN will be issued around 0800 EST tomorrow this evening, following the 0500 EDT advisory on Tropical Storm Elsa, unless conditions warrant a sooner release.