Elsa moved out into the Florida Straits around 2200 EDT yesterday evening.   As of 0500 EDT the center of Elsa was about 50 miles southwest of Key West.  The forecast path has had no significant changes since the last bulletin yesterday evening. Elsa is now moving NNW around the periphery of the upper level subtropical ridge that is over the western Atlantic off the east coast of Florida.  The primary impact to the ARRL West Central Florida Section will be in the coastal counties, particularly in the northern coastal counties from storm surge, tropical storm force winds, and flooding near rivers.  However the inland counties still have a possible impact from flooding due to excessive rainfall particularly near rivers. 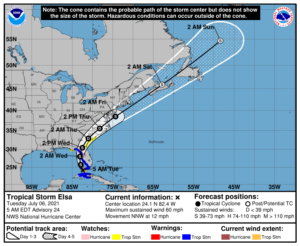 A Storm Surge Warning is in effect for…
* West coast of Florida from Bonita Beach to the Aucilla
River, including Tampa Bay

A Tropical Storm Warning is in effect for…
* The Cuban provinces of Matanzas, Mayabeque, Havana, and Artemisa
* The Florida Keys from Craig Key westward to the Dry Tortugas
* West coast of Florida from Flamingo northward to Ochlockonee River

A Hurricane Watch is in effect for…
* Egmont Key to the Steinhatchee River, Florida

A Tropical Storm Watch is in effect for…
* West of the Ochlockonee River to Indian Pass, Florida
* Mouth of St. Marys River to South Santee River, South Carolina

“Elsa is now located over the Florida Straits, with tropical-storm-force wind gusts occurring across the Lower and Middle Keys. Doppler radar data and satellite images indicate that the core of Elsa is fairly small and has maximum winds of around 50 kt. The outer rainbands associated with Elsa are spreading northward across southern Florida, and a cluster of deep convection has been lingering over portions of central and western Cuba. The Air Force Hurricane Hunters will be investigating Elsa later this morning, and the data the plane collects will be valuable in assessing the storm’s intensity and structure.

Elsa is moving to the north-northwest at about 10 kt on the western periphery of a subtropical ridge that is located over the central Atlantic. The storm should turn northward later today as it moves in the flow between the ridge and a mid- to upper-level low over the south-central U.S. This motion should take the core of Elsa parallel to and likely just offshore of the west coast of Florida through tonight. After that time, a slight turn to the north-northeast is forecast as another trough moves across the north-central U.S. This slight change in heading should bring Elsa inland across the Big Bend region of Florida by early Wednesday and then across coastal Georgia and the Carolinas Wednesday night through early Friday. Thereafter, the storm is expected to accelerate and move northeastward off the mid-Atlantic and New England coasts. The NHC track forecast is basically unchanged from the previous one and lies close to the model consensus aid TVCA.

Now that Elsa is gradually pulling away from Cuba, it will have an opportunity to strengthen. However, the environmental conditions are only marginal for the storm to do so. Dry air on the western side of the cyclone and some westerly shear should prevent rapid intensification, but the small cyclone will likely strengthen slowly before it moves inland over the Big Bend of Florida. The GFS model shows Elsa deepening by 5-10 mb before landfall, and the ECMWF shows even greater pressure falls. Based on these models, the intensity forecast is nudged upward and now shows Elsa just below hurricane force before landfall in Florida. After Elsa moves inland, steady weakening is forecast, but the system is expected to restrengthen over the western Atlantic as it transitions into an extratropical cyclone.

Based on this new forecast, a Hurricane Watch has been issued for a portion of the west-central and Big Bend Florida coast. In addition, it should be noted that much of the west coast of the Florida Peninsula is expected to see wind, rain, and surge impacts since that region will be on Elsa’s east side. A Tropical Storm Watch has also been issued for the Georgia coast and portions of the South Carolina coast.”

As of press time, two ARES Groups have been requested to partially activate:

As a result ARRL West Central Florida Section ARES will go to Level 2 activation, which is a partial activation, due to the activation of ARES groups in Hillsborough and Pinellas Counties.

The next WCF SECTION SPECIAL BULLETIN will be issued around 1800 EST tomorrow this evening, following the 1700 EDT advisory on Tropical Storm Elsa, unless conditions warrant a sooner release.