Elsa made landfall at 1400 EDT on  southern coastline of Cuba and is expected to cross Cuba into the Florida Straits, in the Gulf of Mexico, this evening.  The forecast path has had no significant changes since the last bulletin yesterday evening. Elsa is now moving NW around the periphery of the upper level subtropical ridge that is over the western Atlantic off the east coast of Florida.  Elsa is due to enter the Florida Straits this evening and go generally in a northerly direction, somewhat paralleling the west coast of Florida as it proceeds.   Impacts to the ARRL West Central Florida Section now seem most likely in the coastal counties, due to Elsa moving somewhat parallel to the Florida west coast as it moves in a generally northerly direction towards making a second landfall in the big bend area. 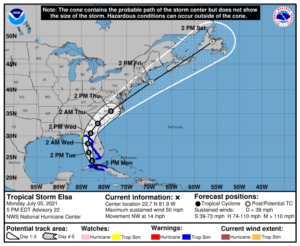 A Tropical Storm Warning is in effect for…
* The Cuban provinces of Cienfuegos, Matanzas, Villa Clara, Mayabeque, Havana, and Artemisa
* The Florida Keys from Craig Key westward to the Dry Tortugas
* West coast of Florida from Flamingo northward to Ochlockonee River

A Tropical Storm Watch is in effect for…
* West of the Ochlockonee River to Indian Pass, Florida

The following excerpt is from the Forecast Discussion issued at 1700 EST today, “Satellite and radar imagery along with surface synoptic observations indicate that the tropical cyclone moved inland over west-central Cuba around 1800 UTC, accompanied by very heavy rains. Assuming that some weakening has occurred due to the influence of
land, the advisory intensity is set to 45 kt. An Air Force Hurricane Hunter aircraft is scheduled to investigate Elsa this evening after the center moves into the Florida Straits and will provide a better assessment of the system’s intensity.

The storm appears to be continuing on its northwestward track and the initial motion estimate is 315/12 kt. There are no changes to the track forecast reasoning from the previous advisory. Elsa should move between the western portion of a mid-level subtropical ridge extending westward from the Atlantic and a broad low pressure area near the northwestern Gulf of Mexico coast for the next couple of days. Later in the forecast period, the system is likely to accelerate northeastward and move from the eastern United States to near Atlantic Canada. The NHC track forecast over the eastern Gulf of Mexico is practically identical to the one from the previous advisory, and a little to the left of the previous one over the eastern United States and the Atlantic. This is in good agreement with the now tightly-clustered track model guidance.

Some restrengthening of the cyclone is likely after it moves into the Gulf of Mexico, but vertical shear associated with a broad upper-level trough over the Gulf is likely to limit intensification. The official intensity forecast is slightly above the latest model consensus, IVCN. Around 96 hours, the global models suggest that the cyclone will merge with a frontal zone, so the forecast shows extratropical transition at that time.”

As of press time, Pinellas County ARES/ACS has been request to staff the Emergency Operations Center and two Community Wellness Centers with auxiliary communications beginning tomorrow morning at 0900.  The Pinellas County EOC is going to a Level 2 activation tomorrow morning at 0900.  Other ARES groups in other counties are either on standby whether formally or informally.  All of the ARES groups in the ARRL West Central Florida Section have been taking preparedness actions with their equipment and supplies, and monitoring the situation carefully, just in case they are requested to active by their various served agencies.

The next WCF SECTION SPECIAL BULLETIN will be issued around 1800 EST tomorrow evening, following the 1700 EDT advisory on Tropical Storm Elsa, unless conditions warrant a sooner release.