Elsa is now nearing the southern coastline of Cuba and is expected to skirt along the Cuban coastline before making landfall and crossing Cuba into the Gulf of Mexico.  The forecast path has had no significant changes since the last bulletin yesterday evening. Elsa is now moving NW around the periphery of the upper level subtropical ridge that is over the western Atlantic off the east coast of Florida, and then enter the Gulf of Mexico and go north in the eastern Gulf of Mexico and making a second landfall on the Florida west coast, most likely just north of the Tampa Bay Area.  According to the Forecast Discussion issued by the National Weather Service Office in Ruskin this afternoon, “There is risk of tropical storm conditions, storm surge, and rainfall impacts along the west coast of Florida beginning as early as Monday night and lasting through Wednesday.”.  Impacts to the ARRL West Central Florida Section now seem more likely in the coastal counties, but the possible storm path still covers all of the ARRL West Central Florida Section. 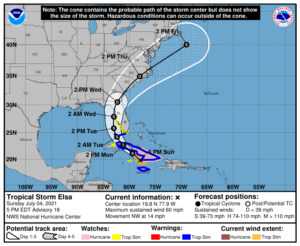 The following excerpt is from the Forecast Discussion issued at 1700 EST today, “Elsa continues to exhibit some well-defined convective banding features over the northern and eastern portions of the circulation. Dvorak current intensity estimates from TAFB and SAB are 45 and 55 kt respectively,so the advisory intensity remains at 50 kt. Although the cirrus-level outflow over the area looks fairly impressive, the SHIPS output diagnoses about 20 kt of vertical shear over the cyclone, which may be inhibiting strengthening. Another negative factor could be blockage of the low-level inflow by the land masses surrounding the cyclone.

The storm has turned toward the northwest, and the initial motion estimate is now 310/12 kt. There is little change to the track forecast reasoning from the previous advisory package. Elsa should move around the western periphery of a mid-level subtropical high pressure area during the next 3 days or so. Thereafter, the system should accelerate northward to northeastward over the eastern United States and the northwest Atlantic. No significant changes have been made to the NHC track forecast, which remains close to the simple and correct model consensus solutions.

Some strengthening could occur as the storm approaches the south coast of Cuba and although not explicitly shown in the official forecast, Elsa could strengthen to near 60 kt before landfall in that country. Over the eastern Gulf of Mexico, southwesterly shear is expected to limit strengthening. The official intensity forecast remains on the high side of the numerical model guidance.”

At the present time, A Tropical Storm Watch has been issued from the Anclote River south through approximately the northern one-third of the Florida Keys.  A Tropical Storm Warning is in effect for the southern two-thirds of the Florida Keys.  A Storm Surge Warning is in effect for Bonita Springs to the Suwanee River including Tampa Bay.

In the ARRL West Central Florida Section, A Tropical Storm Watch and a Storm Surge Watch is in effect for Pinellas, Hillsborough, Manatee, Sarasota, and Charlotte Counties.

All ARES, ACS, and CERT personnel should monitor their email and phones for any requests for assistance from their served agencies through their respective chains of command.  All ARES, ACS, and CERT personnel should perform any last minute checks on equipment and or supplies in case of activation.  Please do not self-activate as requests for assistance and or mutual assistance must follow through the proper procedure.  Any personal preparedness activities should be nearing completion.  Everyone is highly encouraged to continue to check each advisory issued by the National Hurricane Center in Miami and any advisories or Hurricane Local Statements issued by the National Weather Service Office in Ruskin.