Elsa was downgraded to a high end tropical storm from a low end Category 1 hurricane this morning but still has winds near Tropical Storm force right near the center.  The forecast path has had only minor changes since the last bulletin yesterday evening. Elsa is continuing WNW around the periphery of the upper level subtropical ridge that is over the western Atlantic off the east coast of Florida.    The timing of the eventual northwest and north turn will depend upon how far the current trough of low pressure digs into the southeastern United States and how much that trough erodes the upper level subtropical ridge east of the State of Florida.   Impacts to the ARRL West Central Florida Section now seem more likely in the coastal counties, but the possible storm path still covers all of the ARRL West Central Florida Section. 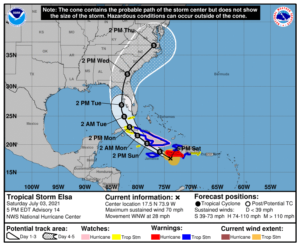 A Hurricane Warning is in effect for…
* Southern portion of Haiti from Port Au Prince to the southern border with the Dominican Republic.

A Tropical Storm Watch is in effect for…
* South coast of the Dominican Republic east of Punta Palenque to Cabo Engano
* Cayman Brac and Little Cayman
* The Cuban provinces of Matanzas, Mayabeque, and Havana
* The Florida Keys from Craig Key westward to the Dry Tortugas

The following excerpts are from the Forecast Discussion issued at 1700 EST today, “Satellite imagery shows that Elsa looks ragged and disorganized at this time, with bursts  of convection occuring near the low-level center and poorly-defined convective banding. Some of this is likely due to the the proximity of the system to Hispaniola. Air Force Reserve and NOAA Hurricane Hunter aircraft have reported reliable 55-60 kt surface wind estimates from the SFMR, along with the latest central pressure report of 1000 mb. The initial intensity remains 60 kt based mainly on the SFMR data.

The initial motion is now 295/24. There is little change in the forecast philosophy from the previous advisory. Elsa is approaching a weakness in the subtropical ridge caused by a  large baroclinic trough over the eastern United States. The global models forecast this trough to move eastward into the Atlantic, but the southern portion is likely to split off and become an upper-level low pressure area over the western Gulf of Mexico, with the subtropical ridge over the Atlantic situated to the east of the this low. In response, Elsa should slow its forward motion and turn northwestward during the next 48 h, followed by a general northward motion from 60-96 h and recurvature into the westerlies after that time. The forecast track takes the center near or over southwestern Haiti, Cuba, and the eastern Gulf of Mexico or the Florida Peninsula during the next 3 days or so. After that, the
system is likely to cross portions of the southeastern United States on its way into the Atlantic. The new forecast track is changed little from the previous advisory, and it lies near the center of the now reasonably-agreeing track guidance envelope.

In addition to land interaction, Elsa continues to be affected by northwesterly shear that is at least partly due to the fast low-level flow that the storm is embedded in. Some shear is
expected to continue through the next 72 h. However, once the system passes the southwestern peninsula of Haiti, there may be less land interaction than previously forecast. The intensity guidance is in good agreement on weakening during the next 48 h, and the GFS, UKMET, and ECMWF show Elsa as a not very vertically aligned system
with some separation between the low- and mid-level centers over the southeastern Gulf of Mexico. After that, despite the shear, upper-level divergence associated with the aforementioned upper-level low could allow for some re-intensification as forecast by the HWRF and other models. The new NHC intensity forecast calls for some weakening in the first 48 h and then shows re-intensification over the Gulf of Mexico. Through the first 72 h,
the forecast remains at the upper edge of the intensity guidance.

Hurricane warnings remain in effect for portions of Haiti at this time, as there is still the possibility that a short-lived re-intensification might occur due to a convective burst.

Given the remaining uncertainty in the track forecast and the degree of land interaction with Hispaniola and Cuba, users are urged to factor in some of this uncertainty. For reference, average NHC track errors at days 3 and 4 are 125 miles and 150 miles,
respectively. The average NHC intensity errors are around 15 mph for both days 3 and 4.
”

All ARES, ACS, and CERT personnel should monitor their email and phones for any requests for assistance from their served agencies through their respective chains of command.  All ARES, ACS, and CERT personnel should perform any last minute checks on equipment and or supplies in case of activation.  Please do not self-activate as requests for assistance and or mutual assistance must follow through the proper procedure.  Any personal preparedness activities should be brought to completion in the next 24 hours. Everyone is highly encouraged to continue to check each advisory issued by the National Hurricane Center in Miami and any advisories or Hurricane Local Statements issued by the National Weather Service Office in Ruskin.