Elsa, which formed in the Atlantic east of the Windward/Leeward Islands on Wednesday June 30, became a low end Category Hurricane this morning.  Elsa is continuing WNW around the periphery of the upper level subtropical ridge that is over the western Atlantic off the east coast of Florida.    The timing of the eventual northwest and north turn will depend upon how far the current trough of low pressure digs into the southeastern United States and how much that trough erodes the upper level subtropical ridge east of the State of Florida.   Impacts to the ARRL West Central Florida Section are far from certain at this point.  Therefore with the potential impacts to the State of Florida and the ARRL West Central Florida Section, WCF SECTION SPECIAL BULLETINS on Elsa will now commence. 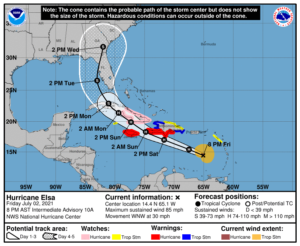 A Hurricane Watch is in effect for…
* The Cuban provinces of Camaguey, Granma, Guantanamo, Holguin,
Las Tunas, and Santiago de Cuba

The following excerpts are from the Forecast Discussion issued at 1600 EST today, “Data from an Air Force Reserve hurricane hunter aircraft indicate that Elsa has weakened slightly, and that the flight-level and surface centers are not vertically aligned. The maximum 700-mb wind speed measured was 75 kt and the highest SFMR surface wind sampled was 61 kt in the northeastern quadrant. However, these data were collected outside of the strongest convection that was occurring just east of the flight track, so the intensity has only been lowered to 70 kt, which is supported by the slightly higher central pressure of 995 mb sampled by a dropsonde.

The initial motion estimate now is 285/25 kt. There remains little significant change to the previous track forecast or reasoning. The latest 00Z model guidance has become more convergent and now lies nearly on top of the previous advisory track. Over the last 48 h, the ECMWF model has steadily shifted Elsa’s track westward by about 1 degree of longitude each model cycle, with the latest ECMWF forecast track now being located about 240 nmi west of its forecast track two days ago. As a result, less weight has been placed on the ECMWF solution for this advisory. However, even its latest solution no longer takes Elsa over the heart of Hispaniola. Elsa should continue to move generally west-northwestward for the next 48 h, accompanied by a slow but steady decrease in forward speed. By the time the hurricane nears southern Cuba, the forward speed should be less than 15 kt. Thereafter, Elsa should gradually turn northwestward and eventually northward through a developing weakness in the subtropical ridge This motion should take Elsa across Cuba and over the eastern Gulf of Mexico or the nearby Florida Peninsula on day 4, followed by a motion over the coastal regions of the southeastern United States on day 5. The new NHC forecast track is essentially just an update of the previous advisory, and closely follows a blend of the GFS, UKMET, and HWRF models, and the TVCA
simple consensus model.

Elsa’s fast forward speed and recent entrainment of dry mid-level air into the western semicircle has eroded some of the inner-core convection, resulting in the aforementioned weakening. In fact, NOAA G-IV dropsondes launched around 2100 UTC northwest of Elsa indicated a significant dry-air layer between 400-500-hPa that may have been imported by moderate northwesterly mid-level shear. However, as the cyclone’s forward speed steadily decreases, the low-, mid-, and upper-level circulations should become more vertically aligned, which should allow for at least some slight re-strengthening during the next 24 h or so. Possible interaction with the landmasses of Haiti, southeastern Cuba, and Jamaica is the primary reason for not showing a more robust intensity forecast given the very warm water beneath the hurricane and a very favorable upper-level wind flow regime. The latest GFS and UKMET models indicate that Elsa will be moving into the center of a 300-200-mb synoptic-scale anticyclone, which would produce enhanced outflow jets to the north and south of the cyclone, resulting in significant strengthening. If Elsa ends up ‘threading-the-needle’ between Haiti, Jamaica, and Cuba, then subsequent intensity forecasts may have to be increased similar to the much stronger HWRF model. For now, the official NHC intensity forecast maintains continuity with the previous advisory, and shows only slight re-strengthening due to possible interaction with land.”

At the present time, there are no watches or warning for either the State of Florida or the ARRL West Central Florida Section.

As of press time, there have not been any requests for communications assistance from any ARES or CERT group in the ARRL West Central Florida Section,

All ARES, ACS, and CERT personnel should monitor their email and phones for any requests for assistance from their served agencies via their respective chains of command.  All ARES, ACS, and CERT personnel should perform any last minute checks on equipment and or supplies in case of activation.  Please do not self-activate as requests for assistance and or mutual assistance must follow through the proper procedure.  Any personal preparedness activities should be brought to completion in the 24 to 48 hours. Everyone is highly encouraged to continue to check each advisory issued by the National Hurricane Center in Miami and any advisories issued by the National Weather Service Office in Ruskin.