Eta became a minimal Category 1 hurricane around 0700 hours this morning and now due to dry air entering the storm, cooler waters, and increasing wind shear on its current track, has weakened slightly and is now a tropical storm once again.  Eta is picking up forward speed slowly and is still expected to make landfall as a Tropical Storm around Citrus or Levy County early tomorrow morning, and cross the Florida Peninsula and exit out into the Atlantic by tomorrow afternoon.  The ARRL West Central Florida Section will continue to experience gusty winds and heavy rainfall through tomorrow and conditions to really begin improving on Friday.  Eta is expected to be absorbed by a cold front headed towards Florida in about 72 hours. 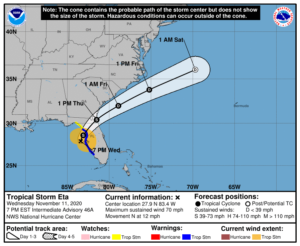 A Storm Surge Warning is in effect for…
* Bonita Beach to Suwanee River Florida, including Tampa Bay and Charlotte Harbor

The following excerpts are from the Forecast Discussion issued at 1600 EST today, “Almost as quickly as Eta regained hurricane status, it then lost it shortly thereafter. Dry air entrainment eroded most of the significant convection around the center this afternoon until a slight resurgence recently developed. However, the overall convective pattern has changed little with the bulk of the convection located primarily northeast through southeast of the center. The last recon pass through Eta showed that the central pressure had increased to 990 mb. Recent Doppler velocities of around 70 kt between 5000-6000 ft east of the center supports surface winds of about 56-58 kt, so the 1800Z intensity of 60 kt will also be kept for the 21Z advisory intensity.

The initial motion estimate is northward, or 010/10 kt. Eta is expected to move between north and north-northeastward tonight as the cyclone rounds the western periphery of a deep-layer ridge to the east. The new NHC model guidance remains in excellent agreement on Eta turning northeastward after 12 hours, with the cyclone making landfall along the western coast of the northern Florida peninsula in the region from Cedar Key to Crystal River. Eta is then expected to accelerate northeastward across northern Florida as a weakening tropical cyclone, and emerge over the western Atlantic by late Thursday morning or early afternoon. By 72 hours, if not sooner, Eta is forecast to merge with a frontal system off of the southeastern United States. The new official track forecast is similar to the previous advisory track, and lies close to a blend of the consensus models TVCN, NOAA-HCCA, and FSSE.

Eta will be moving over progressively cooler waters during the next 12 hours, with SSTs decreasing to less than 25 deg C just before the cyclone makes landfall along the Florida coast. The cooler waters, in conjunction with continued dry air entrainment and increasing westerly vertical wind shear, should result in at least gradual weakening until landfall occurs, followed by more rapid weakening as Eta moves over the northern Florida peninsula. Although the official forecast calls for Eta to be a tropical storm as it nears the northeast coast of Florida, a Tropical Watch or Warning are not required at this time since any tropical-storm-force will likely be occurring over water and not inland or along the coast due to Eta’s poor convective structure that is expected at that time. Eta is forecast to degenerate into a remnant low by 60 hours due to even stronger wind shear, and dissipate by 72 hours due to frontal interaction.”

At the present time Hillsborough County ARES/RACES and Pinellas County ARES/ACS are active assisting their respective emergency management agencies with auxiliary communications via amateur radio. Manatee ARES and Sarasota ARES were as of last report on standby to deploy if their services were requested.  ARRL West Central Florida Section ARES Activation Level continues at a Level 2 activation and will remain there until all ARES groups in the ARRL West Central Florida Section demobilize.  A Regional Skywarn Net will continue to be in service on the NI4CE Repeater System (http://www.ni4ce.org)  to report any severe weather to the National Weather Service Office in Ruskin.  Note:  The Eagle Net normally scheduled for 2030 EST has been cancelled for this evening in order to not impede emergency operations.

All ARES, ACS, and CERT personnel should monitor their email and phones for any requests for assistance from their served agencies via their respective chains of command.  Please do not self-activate as requests for assistance and or mutual assistance must follow through the proper procedure.  Everyone is highly encouraged to continue to check each advisory issued by the National Hurricane Center in Miami and any advisories issued by the National Weather Service Office in Ruskin.