Usually unexpected things happen in the middle of the night and changes in the track of tropical systems are no exception.  Since the last briefing, Eta became a minimal Category 1 hurricane around 0735 hours this morning and the track of Hurricane Eta has changed significantly.  Eta is now forecast to weaken slightly, make landfall as a Tropical Storm around Citrus or Levy County tomorrow morning, and cross the Florida Peninsula and exit out into the Atlantic by tomorrow evening.  To say the least gusty winds and heavy amounts of rain can be expected for the next 24 – 48 hours. 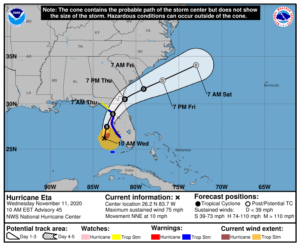 A Storm Surge Warning is in effect for…
* Bonita Beach to Suwanee River Florida, including Tampa Bay and Charlotte Harbor

The following excerpts are from the Forecast Discussion issued at 1600 EST today, “Eta became much better organized between 0900-1000 UTC this morning, including the formation of a well-defined, closed circular eye about 20-25 nmi wide. However, since then the satellite and radar
signature have become more ragged as dry air has entrained into the western semicircle of the cyclone and has also penetrated into the
inner-core region, resulting in a significant degradation of the convection in that portion of Eta’s circulation. A couple of hours ago, a NOAA Hurricane Hunter aircraft penetrated the remnant eye feature and measured a central pressure of 984-983 mb, and also measured 850-mb maximum flight-level winds of 83-85 kt east of the center just outside of a deep convective band. WSR-88D Doppler radar data from Tampa Bay (KTBW) indicated a long fetch of Doppler velocities of 80-88 kt at 13,500 ft directly above and east of the aircraft report, and this was within a band of strong convection characterized by radar reflectivities of 45-49 dBZ. Based on the combination of the wind data and the relatively low central pressure, Eta was upgraded to hurricane status at 1200 UTC. The initial motion estimate is north-northeastward, or 015/09 kt. The latest NHC model guidance is excellent agreement on Eta moving north-northeastward for the next 24 hours around the the western periphery of a deep-layer subtropical ridge that extends westward across the western Atlantic to just off the Florida east coast.  Thereafter, the cyclone will move north of the ridge axis and come under the influence of southwesterly to westerly mid- to upper-level flow associated with an approaching cold front, which should result in a faster northeastward motion. By 72 hours, if not sooner, Eta is forecast to merge with the aforementioned frontal system off of the southeastern United States. The new official track forecast is similar to the previous advisory track, and lies just a tad east or to the right of the consensus models TVCN, NOAA-HCCA, and FSSE.

It is quite possible that Eta has peaked in intensity based on the rapid erosion of the convective pattern and an eye feature no longer evident in radar or passive microwave satellite imagery. However, there still remains a band of strong convection in the northeastern quadrant that contains Doppler radar velocity values of 80-88 kt between 6000-9000 ft, which corresponds to equivalent surface winds of at least 65 kt. As long as that feature persists, hurricane-force winds are possible along immediate coastal areas within the hurricane watch area. The latest GFS-and ECMWF-based SHIPS intensity guidance shows significantly drier air wrapping into the center by 24 hours, along with the vertical wind shear increasing to more than 20 kt from the west at that time. That combination of unfavorable environmental parameters is expected to lead to gradual weakening until landfall occurs in about 24 hours, followed by rapid weakening after landfall. Eta is forecast to degenerate into a remnant low by 60 hours due to even stronger wind shear, and dissipate by 96 hours due to frontal interaction.”

As of press time, Hillsborough County ARES/RACES has been requested by Hillsborough County Emergency Management to provide amateur radio operators for five shelters which are scheduled to open at 1300 today.  As of press time, Manatee County ARES is on standby to possibly be activated to provide communications services.  ARRL West Central Florida Section ARES Activation Level will be raised at this time to a Level 2 activation due to the activation of Hillsborough County ARES/RACES and standby of other ARES groups.  A Regional Skywarn Net has been activated on the NI4CE Repeater System (http://www.ni4ce.org)  to report any severe weather to the National Weather Service Office in Ruskin.

All ARES, ACS, and CERT personnel should monitor their email and phones for any requests for assistance from their served agencies via their respective chains of command.  Please do not self-activate as requests for assistance and or mutual assistance must follow through the proper procedure.  Everyone is highly encouraged to continue to check each advisory issued by the National Hurricane Center in Miami and any advisories issued by the National Weather Service Office in Ruskin.

The next WCF SECTION SPECIAL BULLETIN will be issued around 1900 EST this evening, unless conditions warrant a sooner release.