Tropical Depression Eta crossed the Florida Straits, making landfall and crossing the Florida Keys last night, and has turned and moved southwest of the State of Florida.  However Eta is still close enough to have an influence on our weather for the next few days and the timing and direction of Eta still have much uncertainty.  For the majority of the upcoming week we will experience breezy winds out of the east 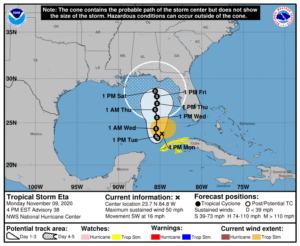 A Tropical Storm Watch is in effect for…
* The Cuban provinces of La Habana, Artemisa, Mayabeque, Pinar del
Rio, and the Isle of Youth

The following excerpts are from the Forecast Discussion issued at 1600 EST today, “Eta’s convective pattern now consists of mainly a compact ring of inner-core convection with cloud tops of -60C to -70C. The earlier main outer convective band located in the northeast quadrant has weakened considerably, and the inflow into that feature is now being shunted westward into Eta’s inner-core region. Visible and water vapor satellite images also indicate that weak anticyclonic cirrus outflow has recently developed over the inner core. The last recon pass through Eta a few hours ago showed a pressure rise to 997 mb that was followed by a pressure decrease to 995 mb on the last pass. Both flight-level and SFMR-derived surface winds had also decreased and only supported around 45 kt, which is the initial intensity used for this advisory.

The initial motion estimate is southwestward, or 235/14 kt. Mid- and upper-level water vapor images show a cut-off low located over the extreme northwestern Caribbean Sea near the Isle of Youth. This feature, in conjunction with a deep-layer ridge extending across Florida and the Gulf of Mexico, is expected to produce northeasterly flow that will keep Eta moving southwestward for the next 24-36 hours. However, the cyclone will gradually slow down during that time as a broad deep-layer trough moving across the central and south-central U.S. weakens the ridge over the Gulf, causing Eta to stall or make a small loop around 36 hours. By 48-60 hours and beyond, the aforementioned trough is forecast to lift out to the northeast, allowing at least some of the Gulf ridge to build back in, slowing down Eta’s poleward progress or even possibly trapping the cyclone over the northeastern Gulf of Mexico. The global and regional models are in very good agreement on the developing track scenario through about 72 hours, and then diverge significantly thereafter, with the bulk of the guidance taking a much weaker Eta northwestward or northward into strong shear conditions. However, the Navy COAMPS-TC model strengthens Eta to near major hurricane status and takes the cyclone northeastward, while the HMON model also intensifies the cyclone into a major hurricane, but leaves it trapped over the southeastern Gulf of Mexico. The latter two scenarios are considered to be outliers due to the abundance of very dry air surrounding Eta and an expected increase in the deep-layer shear to more than 25 kt by 96 and 120 hours. The new official forecast track is to the left or west of the previous advisory track, but not as far west as the consensus models, which take a significantly weaker and more shallow cyclone toward the north-central Gulf coast.

Some re-strengthening appears more likely now that Eta has shed a lot of outer convective baggage and has become more compact, and has developed a donut ring of inner-core convection and some modest upper-level outflow in all quadrants. Eta’s best opportunity for intensification should come during the next 36 hours when the cyclone will be moving over the warm waters of the Gulf of Mexico Loop Current and the deep-layer vertical wind shear gradually decreases to less than 10 kt. Although occasional intrusions of very dry air will prevent rapid intensification from occurring, some gradual strengthening seems to be in order given the other favorable environmental conditions and the cyclone’s new smaller size. By 48 hours and beyond, increasing vertical wind shear and dry air entrainment should cause steady weakening of the cyclone through end of the forecast period. However, if Eta takes a more northwestward track like some of the NHC model guidance is indicating, then the cyclone will get sheared more and weaken sooner than indicated in the official forecast. The new NHC intensity forecast is similar to the previous advisory, and but is lower than intensity consensus models IVCN and HCCA, which re-strengthen Eta to a 65-70 kt hurricane.”

At the present time, all watches and warnings for the State of Florida were dropped earlier today.

Even though the threat from Tropical Storm Eta is diminished to the State of Florida for the time being, everyone is highly encouraged to continue to check each advisory issued by the National Hurricane Center in Miami. Stay prepared in case communications services through asmateur radio are requested by our served agencies later this week.