Tropical Depression Eta reacquired tropical storm strength, crossed Cuba earlier today, emerged into the Florida Straits, and is now turning towards the northwest and west and headed for the Florida Keys.  For the majority of the upcoming week we will experience breezy winds out of the east with some gusts that could approach tropical storm strength particularly early in the week. 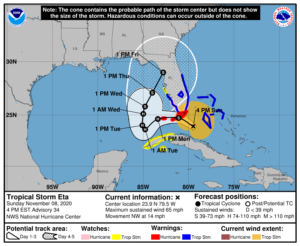 A Storm Surge Warning is in effect for…
* Florida Keys from Ocean Reef to the Dry Tortugas, including Florida Bay

A Hurricane Warning is in effect for…
* Florida Keys from Ocean Reef to the Dry Tortugas, including Florida Bay

A Tropical Storm Watch is in effect for…
* The Cuban provinces of La Habana, Artemisa, Mayabeque, Pinar del Rio, and the Isle of Youth
* Florida coast from north of Englewood to Anna Maria Island

The following excerpts are from the Forecast Discussion issued at 1600 EST today, “Eta’s appearance in radar and satellite imagery has changed little since the previous advisory and the last reconnaissance mission a few hours ago, with a ragged mid-level eye-like feature briefly wrapping up for less than an hour before quickly decaying. Average velocity values from the Miami, Florida, NOAA WSR-88D Doppler weather radar have occasionally been as high as 60 kt between 10,000-12,000 ft ASL to the north and northeast of the center. Therefore, the initial intensity is being maintained at 55 kt for this advisory. A NOAA reconnaissance aircraft is scheduled to investigate Eta around 0000Z this evening.

The initial motion estimate is 325/12 kt. There is no significant change to the previous track forecast reasoning from the last 36 hours. Eta is now moving northwestward around the northeastern side of an upper-level low that has formed over the extreme northwestern Caribbean Sea near the Isle of Youth. The combined easterly flow between the upper-low and a deep-layer ridge located near the U.S. mid-Atlantic coast is expected to force Eta westward overnight and then turn the cyclone slowly southwestward in the 24-48 hour period, with the cyclone possibly stalling just west of the lower Florida Keys when steering currents collapse around 48 hours. By 72 hours and beyond, a broad mid-latitude trough is forecast to move from the U.S. west coast eastward over the central U.S. by 96 hours, and then over the eastern U.S. by 120 hours, which will erode the western portion of the ridge and act to gradually lift Eta northeastward toward northern Florida. The latest NHC model guidance has shifted slightly northward, possibly due to the NOAA G-IV jet aircraft synoptic track dropsonde observations from earlier this morning, and now shows the center of Eta making landfall in the middle or lower Florida Keys late tonight and early Monday. The new NHC official track forecast has been nudged northward close to the consensus models HCCA and TCVA. It should be noted that although the latest model guidance and track forecast shows landfall in the Florida Keys, the strongest winds are occurring, and are expected to occur, well to the north and east of the center.

Satellite imagery indicates that a pronounced dry slot has wrapped into the eastern portion of Eta’s circulation, with radar data suggesting that it has occasionally penetrated into the inner core region as well, eroding the thunderstorm activity in the southern portion of the aforementioned eye-like feature. However, with the vertical shear forecast to steadily decrease from the current 25 kt down to less than 10 kt by 24 hours while Eta is moving over 28.5 deg C SSTs, strengthening is expected late tonight during the convective maximum period and continuing into Monday, resulting in Eta intensifying into a hurricane during that time. Environmental conditions are expected to remain somewhat favorable for Eta to maintain hurricane status through 60 hours, followed by gradual weakening from 72-120 hours due to increasing southwesterly shear of 20-25 kt and entrainment of very dry mid-level air. The latest official intensity forecast is similar to the previous NHC advisory, and remains above the model guidance through 36 hours and is a little below the guidance thereafter.

Based on ASCAT data and surface observations, the wind radii were expanded in the northwest and northeast quadrants.”

At the present time, the only requests that we are aware of is a request by Highlands County Emergency Management for Highlands County ARES personnel to stand by in case their communications services are required.  All SKYWARN spotters should monitor the weather and report any weather that meets the reporting criteria to the National Weather Service Office in Ruskin, as their is a slight risk for tornado activity in South Central and Southwest Florida and some flooding across Charlotte and Lee Counties, according to the Hurricane Local Statement issued by the National Weather Service Office in Ruskin late this afternoon.  All ARES, ACS, and CERT personnel should have any equipment checks completed and be ready to activate if our services are requested by any of our served agencies.  Everyone is highly encouraged to continue to check each advisory issued by the National Hurricane Center in Miami.