Tropical Depression Eta continues its slow track toward Cuba and at its present forward speed should enter the Florida straits tomorrow afternoon and approach the Florida keys and southern coastline on Monday before making a forecast turn to the left into the eastern Gulf of Mexico after merging with a low pressure system.  For the majority of the upcoming week we will experience breezy winds out of the east with some gusts that could approach tropical storm strength particularly early in the week. 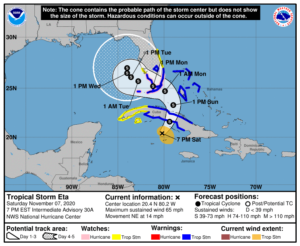 Storm Surge Watch is in effect for…
* Florida coast from Golden Beach to Bonita Beach, including Biscayne Bay
* Florida Keys from Ocean Reef to the Dry Tortugas, including Florida Bay

A Hurricane Watch is in effect for…
* Florida coast from Deerfield Beach to Bonita Beach
* Florida Keys from Ocean Reef to the Dry Tortugas, including Florida Bay

The following excerpts are from the Forecast Discussion issued at 1600 EST today, “An earlier Air Force Reserve Hurricane Hunter aircraft found that Eta had strengthened to 50 kt with a central pressure of 994 mb. Since that time, the storm organization is unchanged in satellite imagery, while the central convection looks a little more ragged in radar data from Grand Cayman Island and Cuba. Eta is currently being affected by 25-35 kt of southwesterly vertical wind shear, and water vapor imagery shows upper-level dry air approaching the inner core from the west.

The initial motion now 050/14. There is little change to the forecast philosophy through the first 96 h of the forecast. A mid-to upper-level trough over the Gulf of Mexico should steer Eta northeastward for the next 12 h or so, which would bring the center near or over the coast of central Cuba. Then from 12-96 h, the trough should cut off into a closed low near western Cuba, with Eta turning northward and eventually westward near the Florida Keys
and south Florida as it merges with the low. The track guidance has shifted a little to the west over Cuba and a little to the south near Florida, possibly in response to data from the G-IV jet mission earlier today, and the new track forecast does likewise. The track guidance becomes quite divergent after 96 h, and the 96-120 h motion is now slower than the previous forecast as a result.

The intensity forecast is tricky. Strong upper-level divergence caused by the trough is allowing the cyclone to strengthen. However, at some time in the next 24-48 h the shear and dry air entrainment should prevent any further strengthening. The intensity guidance shows a little intensification during the next 24-36 h with the bulk of the guidance peaking near 60 kt. After that time, the dry air should cause at least some weakening. The new intensity forecast is increased a bit from the previous forecast to show a 60-kt intensity at 24 and 36 h. This requires issuing a hurricane watch for the Florida Keys and portions of south Florida.”

At the present time, there have not been any requests from any of our served agencies for communications services via amateur radio.  All ARES, ACS, and CERT personnel should take this opportunity to re-check any equipment and supplies that would be used, just in case our services are requested.   Everyone is highly encouraged to continue to check each advisory issued by the National Hurricane Center in Miami.  Please note that the advisories are now being issued at 0400, 1000, 1600, and 2200 hours Eastern Standard Time, due to returning to Eastern Standard Time last Sunday.