Tropical Depression Eta continues its slow track toward Cuba and eventually approaching the southern Florida coastline before making a forecast turn to the left into the eastern Gulf of Mexico.  It is worth noting that the three day forecast cone now touches the southern part of Charlotte County and the five day forecast cone now intersects several coastal counties in the ARRL West Central Florida Section. 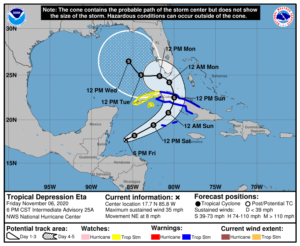 A Tropical Storm Warning is in effect for…
* The Cayman Islands
* The Cuban provinces of Camaguey, Ciego de Avila, Sancti Spiritus, Villa Clara, Cienfuegos, and Matanzas.

A Tropical Storm Watch is in effect for…
* The Cuban provinces of La Habana, Artemisa y Mayabeque, Pinar del Rio, and the Isle of Youth.

The following excerpts are from the Forecast Discussion issued at 1600 EST today, “Reports from an Air Force Reserve Hurricane Hunter aircraft
indicate that the center of Eta is elongated east-to-west with multiple vorticity centers present. The central pressure is near 1002 mb, and the maximum flight-level winds were 30-35 kt at 1500 ft. There were a few spot reports of 35-45 kt winds from the Stepped Frequency Microwave Radiometer, but these were in areas of heavy rain and their reliability is suspect. Based on these data, the initial intensity is kept at 30 kt.

The aircraft data shows that the center is farther south than previously thought, and the initial motion is an uncertain 040/6 kt.  There is no change to the previous track forecast philosophy. A developing mid- to upper-level trough over the Gulf of Mexico is expected to steer Eta northeastward for the next 48 h or so with an increase in forward speed. Between 48-72 h, the trough is forecast to become a closed low near south Florida and western Cuba, causing Eta to turn northwestward around and into the low. After 72 h, the merged system is likely to move slowly westward to northwestward.  While the guidance is in good agreement on the synoptic evolution, there remain differences in the track forecast details in terms of both the heading and the forward speed, with the GFS-based guidance tending to be to the east and north of the UKMET/ECMWF/Canadian. In addition, the HWRF/HMON/Canadian are faster than the other guidance.  The new forecast track overall is a little slower than the previous track, and due to the initial position the first 36 h have been shifted southward.

Eta will move over the warm waters of the northwestern Caribbean during the next 48 h or so, and the upper-level divergence is forecast to be quite strong. This should allow some strengthening, although this is likely to be slowed by 20-30 kt of southwesterly vertical wind shear. The intensity forecast for this part of the cyclone’s life is again similar to the previous forecast and lies near the bulk of the intensity guidance. Between 48-72 h , Eta may take on at least some subtropical cyclone characteristics as it merges with the mid- to upper-level low. The HWRF and HMON models still suggest the possibility that a tight inner wind core may develop, however, the guidance has trended weaker since this
morning, and the new intensity forecast is above the bulk of the guidance. After 72 h, dry air entrainment is expected to cause the cyclone to weaken.

The wind field of Eta is expected to increase in size during the next few days, and the cyclone will likely produce a large area of tropical-storm-force winds on its north side when it is near Cuba, the Florida Keys, and southern Florida.

The new forecast track requires a Tropical Storm Warning for portions of Cuba at this time. Watches may be required for portions of south Florida and the Florida Keys tonight.”

At the present time there are no watches or warnings for the State of Florida and the ARRL West Central Florida Section.  However watches may be required as early as later this evening or tomorrow morning for the southern part of the State of Florida and the Florida Keys.    At the present time, there have not been any requests from any of our served agencies for communications services via amateur radio.  All ARES, ACS, and CERT personnel should take this opportunity to re-check any equipment and supplies that would be used, just in case our services are requested.   Everyone is highly encouraged to continue to check each advisory issued by the National Hurricane Center in Miami.  Please note that the advisories are now being issued at 0400, 1000, 1600, and 2200 hours Eastern Standard Time, due to returning to Eastern Standard Time last Sunday.