After a very busy and exhausting hurricane season, that has included twenty eight named tropical storms, of which eleven became hurricanes and five were Category 3 or greater, and with 11 United States coastal landfalls, we must now focus on Tropical Depression Eta, which made landfall on the coast of Nicaragua on Tuesday afternoon.  Eta has been slowly creeping west through Nicaragua and Honduras and is now re-emerging over the southwestern Carribean Sea.  With the increased threat to the State of Florida, these daily special bulletins commence distribution. 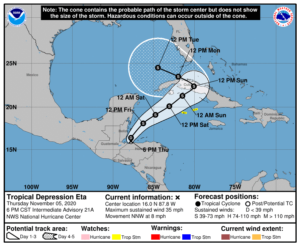 A Tropical Storm Watch is in effect for…
* The Cayman Islands

The following excerpts are from the Forecast Discussion issued at 1600 EST today, “The low-level circulation of Eta has become disorganized to the point that the system more resembles a remnant low than a tropical cyclone. However, the system continues to produce convection in an area just north and northwest of the estimated center position, as well as in a cluster well to the northeast. Based on this, and the expectation that the system will start re-developing during the next several hours as it moves back over water, Eta is maintained as a tropical depression for this advisory. The initial intensity is increased to 30 kt based on scatterometer data, with those winds occuring well to the northeast of the center.

The center appears to be just south of the northwestern coast of Honduras, and the initial motion is an uncertain 330/7. During the next 24 h, Eta should recurve northeastward in southwesterly flow between a ridge over the central Caribbean and a developing mid- to upper-level trough over the central Gulf of Mexico. This motion should persist through about 72 h. After that, the trough is forecast to become a closed low in the vicinity of western Cuba,with Eta turning to the west-northwest as it interacts or merges with the low. While the models are in good agreement with the synoptic pattern, they are in poor agreement on the details of the track. The forecast tracks show possible landfalls in Cuba anywhere between 77W-83W, and after the turn some of the tracks are as far north as southern Florida while other stay over Cuba. In addition, there is a significant speed difference between the faster GFS/HWRF/HMON and the slower Canadian/ECMWF/UKMET. The low-confidence official forecast compromises between these various extremes and is not changed much from the previous forecast.

Little change in strength is expected during the next 12 h or so as Eta starts to re-organized over water. After that, gradual strengthening is expected until the system reaches Cuba in about 72 h, with the main limiting factor being increasing southwesterly shear during that time. From 72-120 h, there is a possibility that Eta will take on subtropical or hybrid characteristics as it interacts with the developing upper-level low. The intensity forecast will be held at 50 kt during that time due to this interaction. The new intensity forecast has only minor tweaks from the previous forecast. However, it lies below the bulk of the intensity guidance for the first 60 h and above the bulk of the guidance from 72-120 h.

At the present time the impacts to the southern part of the State of Florida and the ARRL West Central Florida Section are not that well known due to the course of the storm not being more defined.  At the present time, there have not been any requests from any of our served agencies for communications services via amateur radio.  All ARES, ACS, and CERT personnel should take this opportunity to re-check any equipment and supplies that would be used, just in case our services are requested.   Everyone is highly encouraged to continue to check the latest advisories issued by the National Hurricane Center in Miami.  Please note that the advisories are now being issued at 0400, 1000, 1600, and 2200 hours Eastern Standard Time, due to returning to Eastern Standard Time last Sunday.