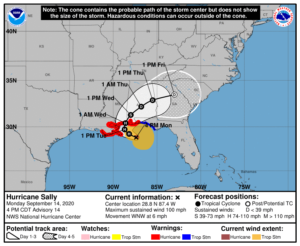 The following excerpts are from the Forecast Discussion issued at 1700 EDT today, “After the rapid spin up of the inner core late this morning, the most recent aircraft passes through the center have not found any higher flight-level winds, however there have been a few SFMR winds
of 85-90 kt reported. Using a blend of the flight-level and SFMR winds the initial intensity has been increased to 85 kt for this advisory. The next Air Force and NOAA aircraft have begun to sample the storm. Now that Sally has developed an inner core, the favorable atmospheric and ocean conditions of low vertical wind shear and warm water should allow for additional strengthening tonight while the system moves over the north-central Gulf of Mexico, and Sally could approach major hurricane strength. On Tuesday, the global models are predicting an increasing in
southwesterly flow aloft, and this increase in shear, the potential for land interaction, and some upwelling over the shallower shelf waters over the northern Gulf should slow the intensification process. The NHC intensity forecast is again near the upper-end of the guidance envelope in best agreement with the HWRF and HFIP corrected consensus models.  Sally did not move much earlier today as the center re-formation took place, but it appears that a slow west-northwestward to northwestward motion has resumed. Weak ridging over the southeastern United States is expected to steer Sally generally west-northwestward through early Tuesday. After that time, steering currents weaken and a slow northward motion is forecast as a weak mid-level trough develops over the the central United States. This trough is forecast to slide eastward, allowing Sally to begin a slow north-northeastward or northeastward motion. The specific timing and location of the turn will be critical as to the eventual
location and timing of landfall along the north-central Gulf Coast.  The UKMET and ECMWF models show a more northeastward motion after
the turn and have trended eastward, with the ECMWF much slower than the remainder of the guidance. The NHC track has been adjusted
eastward, and this requires and eastward extension of the hurricane warning. The new track most closely follows the GFS and it ensemble
mean, but lies to the west of the various consensus aids, so some additional eastward adjustments could be needed in subsequent advisories.

Given the uncertainty in the timing and location of the northward turn and the lack of well-defined steering currents, users are reminded to not focus on the exact forecast track or the specific timing and location of landfall. Hurricane-force winds, dangerous storm surge, and flooding rainfall will affect a large portion of the north-central Gulf Coast during the next few days.”

At the present time, the primary threat to the ARRL West Central Florida Section continues to be the potential for flooding from any further rainfall.  Rain chances will remain elevated for This threat will continue to diminish as Hurricane Sally moves away from the State of Florida.  Everyone should continue monitoring the latest advisories issued four times a day by the National Hurricane Center and for any further watches and or warnings issued by the National Weather Service office in Ruskin.

If Hurricane Sally continues its present course away from Florida, these bulletins will be discontinued most likely after tomorrow, being the threat to the State of Florida will be diminished.

The next WCF SECTION SPECIAL BULLETIN on Hurricane Sally will issued following the 1700 EDT advisory tomorrow for Hurricane Sally, unless conditions warrant a release sooner.