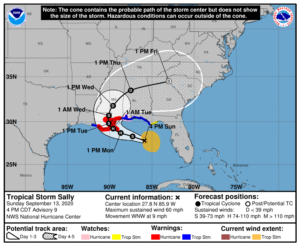 A Storm Surge Warning is in effect for…
* Port Fourchon Louisiana to the Mississippi/Alabama Border
* Lake Pontchartrain, Lake Maurepas, and Lake Borgne

The following excerpts are from the Forecast Discussion issued at 1700 EDT today, “Sally is forecast to move beneath a narrow upper-level ridge axis through Monday and the expected decrease in shear should allow the storm to strengthen. Since Sally is forecast to decelerate on its
approach to the northern Gulf coast, the system still has at least another 36 h to take advantage of the expected conducive environmental conditions. As a result, the NHC intensity forecast continues to call for Sally to become a hurricane on Monday, with additional strengthening likely until landfall. The intensity guidance has trended slightly lower this cycle, with the HMON model now at the upper end of the guidance envelope. The reduction in the statistical guidance is likely due to the fact that Sally has not strengthened today and there is a persistence component to the forecast from those models. The latest NHC intensity forecast is similar to the previous advisory and lies a little above the latest HFIP corrected consensus aid.

Recent satellite and aircraft fixes show that Sally continues to move west-northwestward at about 10 kt. The tropical storm is currently being steered around the southern portion of a mid-level ridge to its northeast. Sally is forecast to reach the western extent of the ridge on Monday, and a slower northwestward motion is expected when the storm is near the north-central Gulf coast. The steering currents are forecast to weaken further in a couple of days as Sally rounds the western extent of the ridge and a slow northward motion is expected during that time. By 72 hours, the cyclone should begin to move somewhat faster toward the northeast as a trough deepens to its west. As often occurs, there has been some run-to-run variability among the various track models, and the latest iterations of them have shifted eastward with a slower forward speed. Despite the shifts of the individual models, the latest consensus aids are only slightly north and east of the previous NHC track through 60 hours, so only a small adjustment has been made to the earlier official forecast through that time. It is important not to focus too much on these small track changes and to the exact forecast track itself, as impacts are expected to extend far from the center. Also, since there is still quite a
bit of model spread in both the location and timing of when the center of Sally reaches the northern Gulf Coast, additional adjustments to the track forecast are possible.  Regardless of Sally’s exact landfall location and intensity, the cyclone is expected to bring wind, storm surge, and rainfall hazards to a large part of the north-central Gulf Coast. In particular, Sally’s slow forward speed near the coast will exacerbate the storm
surge and heavy rainfall threats.”

At the present time a Tropical Storm Watch is in effect for coastal Franklin County.  A Tropical Storm Warning is in effect for Gulf, Bay, Okaloosa, Santa Rosa, and Escambia Counties in the Florida Panhandle.  At the present time there is only a Flood Watch still in effect through  Sunday evening for the entire NWS Ruskin CWA (Coverage Warning Area) extending from Levy County all the way to Lee County on the coast and Polk, Hardee, Highlands, and Desoto Counties.  All of the ARRL West Central Florida Section is included in this Flood Watch.  There are Flood Warnings for portions of the Peace River in Polk County near Bartow and the Myakka River at Myakka River State Park in Sarasota County.  The National Weather Service will make a decision later this evening as what Flood Watches or Warning will need to be extended.

At the present time, the primary threat to the ARRL West Central Florida Section continues to be the potential for flooding from excessive rainfall that has already occurred from Tropical Storm Sally, and any further rainfall will tend to aggravate that situation.  This threat will continue to diminish as Tropical Storm Sally moves away from the State of Florida.  Everyone should continue monitoring the latest advisories issued four times a day by the National Hurricane Center and for any further watches and or warnings issued by the National Weather Service office in Ruskin.on Tropical Depression Nineteen.

If Tropical Storm Sally continues its present course away from Florida, these bulletins will be discontinued most likely after tomorrow, being the threat to the State of Florida will be diminished.