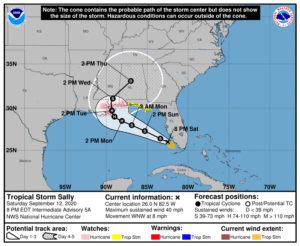 A Storm Surge Watch is in effect for…
* Mouth of the Mississippi River to the Alabama/Florida Border
* Lake Pontchartrain, Lake Maurepas, and Lake Borgne
* Mobile Bay

The following excerpts are from the Forecast Discussion issued at 1700 EDT today, “Sally continues to gradually become better organized, with
developing convective banding features primarily over the southernportion of the circulation at this time. Upper-level outflow is still rather limited over the northern semicircle, possibly due to a weak upper low near the Georgia/Florida border. The latter feature is likely to soon move away from the area, however. Based on earlier scatterometer passes that showed tropical-storm-force winds over the Straits of Florida, the advisory intensity remains 35 kt.  With very warm waters and a moist tropospheric environment ahead of Sally, strengthening seems likely. Some increase in westerly shear over the northern Gulf in 48-72 hours could at least slow down the intensification process around that time. The official intensity forecast is not far from the latest model consensus and a little above the previous forecast.

Fixes from an Air Force Hurricane Hurricane aircraft, radar, satellite, and surface observations indicate a slow, generally westward motion of about 280/6 kt. A weakening mid-level high pressure system to the northeast of Sally should cause a generally west-northwestward to northwestward motion for the next few days.  Because of the weakening steering currents, the cyclone should move rather slowly while it approaches the northern Gulf Coast.  However, there is expected to be enough of a narrow north-south oriented ridge to the east of Sally in 3-4 days to steer the cyclone northward across the coast. The official track forecast has been nudged just slightly west of the previous one and lies
between the simple and corrected dynamical track model consensus predictions.

At the present time Tropical Storm Watches are in effect for Escambia, Santa Rosa, Okaloosa, Bay, Gulf, and Franklin Counties in the Florida Panhandle. The Tropical Storm Watch for the Florida east coast have been discontinued,  At the present time there is only a Flood Watch still in effect until Sunday evening for the entire NWS Ruskin CWA (Coverage Warning Area) extending from Levy County all the way to Lee County on the coast and Polk, Hardee, Highlands and Desoto Counties.  All of the ARRL West Central Florida Section is include in this Flood Watch.  Ther are Flood Warnings for portions of the Peace River in Polk County near Bartow and the Myakka River at Myakka River State Park in Sarasota County.

At the present time, the primary threat to our the ARRL West Central Florida Section continues to be the potential for flooding from possibly excessive rainfall as West Central Florida is on the wetter side of Tropical Storm Sally.  This threat will continue to diminish as Tropical Storm Sally moves away from the State of Florida.  Everyone should continue monitoring the latest advisories issued four times a day by the National Hurricane Center and for any further watches and or warnings issued by the National Weather Service office in Ruskin.on Tropical Depression Nineteen.  All ARES, ACS, and CERT personnel should re-check their supplies and equipment just in case their services are required.