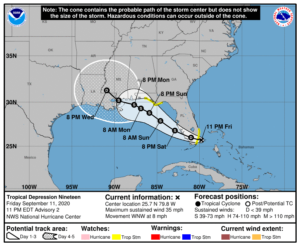 The following excerpts are from the Forecast Discussion issued at 2300 EDT today, “Doppler radar data from Miami and satellite images indicate that the depression is gradually becoming better organized. The low-level center is estimated to be near the northwestern edge of the main area of deep convection due to some northerly wind shear.  Surface observations and satellite classifications support holding the initial intensity at 30 kt. The minimum pressure appears to be a little lower than before, now 1007 mb.

The tropical depression is moving west-northwestward at about 7kt. A subtropical ridge extending from the southeast U.S. to the western Atlantic should steer the depression west-northwestward across south Florida tonight and Saturday morning and then over the eastern Gulf of Mexico late Saturday and Sunday. After that time, the ridge is forecast to weaken due to an approaching trough, but the trough is not expected to be strong enough to cause the cyclone to turn northward. Instead, the models suggest that a slow west-northwestward motion very near the northern Gulf coast is likely during the early and middle portions of next week.  Although the models all show a relatively similar scenario, there is a fair amount of spread by the time the system nears the northern Gulf coast. The NHC track forecast lies roughly near the middle of the guidance envelope close to the consensus aids.  Several of the local National Weather Service forecast offices across the southeast U.S. will be launching weather balloons four times per day, which should provide the models with excellent data in hopes to provide better track guidance during the next couple of days.

Since the depression is expected to move over very warm SSTs, once it reaches the eastern Gulf of Mexico tomorrow, and remain in an
environment of low wind shear and high moisture, gradual strengthening seems likely. The models suggest that there could be an increase in westerly shear around the time the cyclone is forecast to move inland along the northern Gulf coast in about 4 days. Based on these expected environmental conditions, strengthening is forecast during the next few days, and the NHC intensity forecast follows the trend of the IVCN and HCCA models.  The depression will likely be at or near hurricane strength when it reaches the northern Gulf coast.”

At the present time Tropical Storm Watches are in effect for Palm Beach, Broward, Miami-Dade, and Monroe counties on the Florida east coast and Okaloosa, Bay, Gulf, and Franklin Counties in the Florida Panhandle.  At the present time there is only a Flood Watch in effect until Sunday evening for the entire NWS Ruskin CWA (Coverage Warning Area) extending from Levy County all the way to Lee County on the coast and Polk, Hardee, Highlands and Desoto Counties.  All of the ARRL West Central Florida Section is include in this Flood Watch.

At the present time, the primary threat to our the ARRL West Central Florida Section will be the potential for flooding from possibly excessive rainfall as West Central Florida is on the wetter side of Tropical Depresssion Nineteen.  Everyone should continue monitoring the latest advisories issued four times a day by the National Hurricane Center and for any further watches and or warnings issued by the National Weather Service office in Ruskin.on Tropical Depression Nineteen.  All ARES, ACS, and CERT personnel should re-check their supplies and equipment just in case their services are required.