The following is the latest advisory on Tropical Storm Isaias.  Isaias has remained a strong tropical storm since last on Saturday due to 30 MPH wind shear.  Isaias is expected to remain a strong Tropical Storm and regain status as a Category 1 hurricane, due to a change in the direction of the wind shear,  before making landfall later this evening near the border between South Carolina and North Carolina.  All Tropical Storm watches and warnings were discontinued for the entire State of Florida at 1100 EDT earlier today. 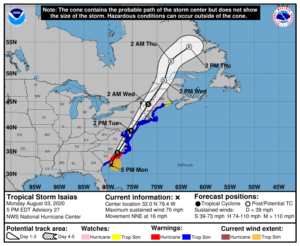 The following excerpts are from the Forecast Discussion issued at 1700 EDT on Tropical Storm Isaias, “Isaias is now moving north-northeastward 015/14 kt. The new NHC model guidance remains in excellent agreement on Isaias continuing to gradually accelerate north-northeastward to northeastward for the next 36 hours ahead of a powerful deep-layer trough and associated cold front. The cyclone should make landfall later this evening near the South Carolina-North Carolina border, and then accelerate north-northeastward at 25-30 kt across eastern North Carolina early Tuesday, eastern Virginia and the Delmarva peninsula Tuesday afternoon, and into New England Tuesday night into early
Wednesday. The new NHC track forecast is just an update and extension of the previous advisory track, and lies very close to a blend of the tightly packed multi-model consensus aids TVCA, GFEX, TVCX, and NOAA-HCCA.

Satellite animation and special 1800Z upper-air soundings indicate that the vertical shear across Isaias has weakened and has also become more southwesterly, which better aligns with the forecast track. Given this and the improved structure of the system, Isaias is still expected to strengthen and regain hurricane status before making landfall, and most of the intensity guidance shows a 60-65 kt system at that time. It should be emphasized that there is little difference between a strong tropical storm or a category 1 hurricane in terms of impacts.

After landfall, Isaias is forecast to only slowly weaken due to interaction with an unusually strong 100-120 kt jetstream. The expected strong baroclinic forcing will keep Isaias’ circulation intact and also produce very strong wind gusts along the mid-Atlantic coast tomorrow. As a result, the gust factors at 24-48 h have been increased above the standard 20 percent in the Forecast/Advisory (TCMAT4). The cyclone is forecast to be absorbed by a larger extratropical low over Canada in 3-4 days.”

All tropical storm watches, tropical storm warnings, hurricane watches, or hurricane warnings have been discontinued for the entire State of Florida as of 1100 EDT today.   Just continue to stay closely tuned to the any advisories that are issued on Tropical Storm Isaial and the Topical Weather Outlook issued four times daily by the National Hurricane Center in Miami.

Due to discontinuance of all tropical storm and hurricane watches and warnings, this will be last WCF SECTION SPECIAL BULLETIN issued for Tropical Storm Isaias.