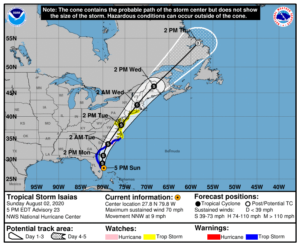 The following is the latest advisory on Tropical Storm Isaias.  Isaias has remained a strong tropical storm since yesterday due to continuing nearly 30 MPH wind shear.  Isaias is expected to remain a strong Tropical Storm before eventually making landfall somewhere in the Carolina’s in approximately 36-48 hours.

Interests elsewhere along the northeast coast of the United States should monitor the progress of Isaias. Additional watches or warnings may be required tonight or early Monday.

The following excerpt is from the Forecast Discussion issued at 1700 EDT on Hurricane Isaias, “The earlier intense recent burst has waned since this morning, but the large convective cell has persisted…the cyclone has become more steady state with Doppler radar and Air Force Reserve aircraft data indicating surface winds in the 56-63 kt range. Therefore, the initial intensity of 60 kt is an average of these values.

Radar and aircraft fixes indicate that Isaias is still moving toward the north-northwest or 345/08 kt. The latest model guidance remains in excellent agreement on Isaias moving north-northwestward through a break in the subtropical ridge tonight and turning northward by Monday morning, all the while remaining offshore of the coast from east-central Florida to Georgia. By Monday night, Isaias is forecast to turn northeastward and accelerate toward the Carolinas, reaching the mid-Atlantic states on Tuesday and New England by early Wednesday. The new NHC forecast track during the first 24 hours lies a little east of the previous one, but is essentially just an extension of the previous advisory track thereafter, and lies close to the various consensus models, which are lightly packed around the previous NHC foreast.

Isaias will continue to move slowly over the warm Gulfstream waters for the next 36 h or so. Despite unfavorable vertical shearconditions of around 25 kt, Isaias is expected to maintain its current intensity until landfall, and could restrengthen to hurricane status in 24-36 h when the vertical shear vector is forecast to switch from westerly to southwesterly which would align the shear along the direction of storm motion. Some baroclinic interaction is expected on days 2-3 when Isaias will move into the right-rear quadrant of an anticyclonically curved jet streak, which is expected to hold the intensity a little above what would normally be expected for a post-landfall tropical cyclone. The NHC intensity forecast is similar to the HFIP corrected consensus model and the IVCN intensity consensus model, which agree well with the GFS and ECMWF model intensity forecasts.”

As of press time, there are no tropical storm watches, tropical storm warnings, hurricane watches, or hurricane warnings for any counties in the ARRL West Central Florida Section.  As of press time, there still have not been any requests for activation by any of our served agencies in any of our ten counties nor are any anticipated at this time.  As Tropical Storm Isaias is now beginning to pull away from the ARRL West Central Florida Section, the threat to our area will begin to diminsh.  All SKYWARN trained operators should monitor for any advisories, watch, or warnings that may be issued in relation to any potential threats from severe weather.  Continue to stay closely tuned to the latest advisories issued by the National Hurricane Center in Miami.