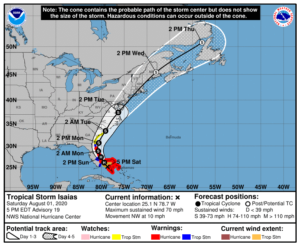 The following is the latest advisory on Tropical Storm Isaias.  Isaias has temporarily weakened from a category 1 hurricane to a strong tropical storm.  Isaias is expected to re-strengthen to a Hurricane before reaching its nearest point to the Florida East Coast.

Interests elsewhere along the southeast and mid-Atlantic coasts of
the United States should monitor the progress of Isaias. Additional
watches or warnings may be required tonight or Sunday.

The following excerpt is from the Forecast Discussion issued at 1700 EDT on Hurricane Isaias, “The last data received from a previous Air Force Reserve reconnaissance aircraft, along with recent satellite and radar imagery, indicate that Isaias has weakened to a tropical storm due
to a combination of shear, dry air and interaction with Andros Island earlier today. The initial intensity of 60 kt is based on SFMR surface wind speeds of near 60 kt in the northeastern quadrant on the last flight. A new reconnaissance mission into the cyclone is currently ongoing and will provide new data concerning the Isaias’ intensity.

The initial motion estimate is 315/09 kt. After making a slight west-northwestward jog a few hours ago after convection significantly weakened, Isaias appears to have returned to its base northwestward course. The new NHC model guidance is tightly packed but has shifted slightly westward, with some of the more reliable models now showing landfall along the east-central Florida coast in about 24 hours. Earlier NOAA G-IV jet dropsonde data and 12Z upper-air data reveal that the surface to 700 mb ridge extending east-west across central and northern Florida remains intact whereas the 500-300 mb ridge has completely eroded. The result is that lower level ridge will cause Isaias to slow its forward motion to northwestward at 6-8 kt during the next 36 hours. By 48 hours, the erosion of the ridge due to an approaching shortwave trough will
allow the cyclone to move northward, followed by a gradual increase in forward speed toward the northeast on days 3-5. The new NHC track
forecast was nudged slightly closer to the Florida east-central coast through 24 hours, with no significant changes made to the previous forecast after 36 hours.

A combination of Isaias moving over the warm Gulfstream waters during the convective maximum period and increasing frictional convergence due to land interaction with Florida should lead to an increase in deep convection near and over the center, as shown by simulated satellite imagery from the ECMWF model. As a result, Isaias is forecast to regain hurricane status tonight, as shown by the HWRF and HMON model fields. By 36 hours and beyond, the global models are in good agreement that an approaching mid- to upper-level trough will increase southwesterly vertical wind shear, which should result in gradual weakening until Isais becomes an extratropical cyclone in about 96 hours. The new NHC intensity forecast is closest to the HMON in 12 hours and closely follows the IVCN and HCCA consensus models after 36 hours…”

As of press time, there are no tropical storm watches, tropical storm warnings, hurricane watches, or hurricane warnings for any counties in the ARRL West Central Florida Section.  As of press time, there still have not been any requests for activation by any of our served agencies in any of our ten counties nor are any anticipated at this time.  All ARES, ACS, and CERT personnel should continue to stay in contact with their respective leadership in case emergency communications services via amateur radio are required.   All SKYWARN trained operators should monitor for any advisories, watch, or warnings that may be issued in relation to any potential threats from severe weather.  Continue to stay closely tuned to the latest advisories issued by the National Hurricane Center in Miami.