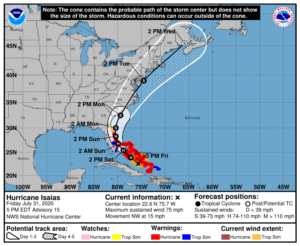 The following is the latest advisory on Hurricane Isaias.  Isaias was declared a Hurricane on Friday July 31, 2020 at 0000 EDT.  The first Tropical Storm Warnings for the State of Florida were issued for portions of the Florida East Coast at 1700 EDT on Thursday July 30, 2020.

The following is the summary of the National Hurricane Center Advisory #9 issued at 1800 EDT on Friday July 31, 2020:

Interests elsewhere along the southeast coast of the United States should monitor the progress of Isaias. Additional watches or
warnings may be required later tonight and Saturday.

The following excerpt is from the Forecast Discussion issued at 1700 EDT on Hurricane Isaias, “The initial motion remains northwestward or 305/12 kt. The 12Z global models have once again made a westward shift due to the ridge to the north of Isaias not weakening as quickly as expected. This is partly due to the ridge being stronger than expected and a shortwave trough over the central United States moving a little slower into the southeastern U.S. than previously indicated. The UKMET and ECMWF explicitly show Isaias making landfall in 36-48 hours along the southeast Florida coast, but appear to weaken the system below hurricane strength. The GFS similarly brings the cyclone close to the southeast and east-central Florida coasts, but also as a somewhat weaker system. In the 48 to 60-hour period, the cyclone is forecast to move slowly north-northwestward and northward through a break in the subtropical ridge extending westward from the Atlantic across Florida and into the northern Gulf of Mexico. By that time, however, Isaias is expected to weaken below hurricane strength due to the combination of strong southwesterly vertical wind shear and interaction the Florida peninsula. Around 72 hours, the cyclone should accelerate northeastward and possibly strengthen some before passing over eastern North Carolina on day 4, and across eastern New England on day 5. The NHC track forecast lies close to a blend of the consensus models TVCA and NOAA-HCCA and is east of the UKMET and ECMWF with the system forecast to be stronger than those models indicate. Due to the westward shift in the NHC forecast track, a Hurricane Warning and Storm Surge Watch have been issued for portions of the Florida east coast.”

As of press time, there still have not been any requests for activation by any of our served agencies in any of our ten counties.   All ARES, ACS, and CERT personnel should continue to stay in contact with their respective leadership in case emergency communications services via amateur radio are required.   All SKYWARN trained operators should monitor for any advisories, watch, or warnings that may be issued in relation to any potential threats from severe weather.  Continue to stay closely tuned to the latest advisories issued by the National Hurricane Center in Miami.

The next WCF SECTION SPECIAL BULLETIN will be issued tomorrow following the 1100 EDT advisory unless conditions warrant a sooner release.