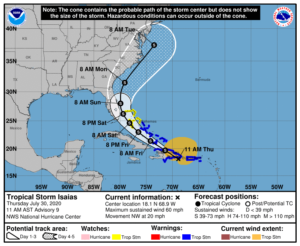 The following is the latest advisory on Tropical Storm Isaias.  Isaias was declared a Tropical Storm on Wednesday July 29, 2020 at 2300 EDT.  Previously the National Hurricane Center in Miami had designated this system as Potential Tropical Cyclone Number Nine on Monday .  Now that Isaias is a declared tropical cyclone, WCF SECTION SPECIAL BULLETINS will commence on this system.

The following excerpt is from the Forecast Discussion issued at 1100 EDT on Tropical Storm Isaias, “Isaias is moving northwestward or 310/16 kt. A high pressure ridge over the western Atlantic should steer Isaias on a west-northwestward to northwestward heading over the next couple of days, but the likelihood of a center re-formation during the next 12-18 hours means that some adjustments to the track and motion are possible. By late Friday, a mid-latitude trough moving into the east-central United States is expected to weaken the western portion of the ridge. This pattern should cause the cyclone to turn northwestward to north-northwestward on Saturday when it is near the northwestern Bahamas and South Florida. As the trough slides eastward over the United States, this should steer Isaias northward and northeastward early next week. Although the bulk of the track guidance agrees on this overall scenario, the confidence in the track forecast remains lower than usual due to the expected land interaction and possible center reformation in the short term. The new NHC track forecast is a blend of the HFIP corrected consensus and the TCVA multi-model consensus, and is similar to the previous advisory…The intensity forecast remains challenging. The structure of the storm is likely to be disrupted by its passage near or over Hispaniola today, and some weakening is likely. Once the system moves away from the Greater Antilles gradual strengthening is anticipated.”

The next WCF SECTION SPECIAL BULLETIN will be issued following the 1100 EDT advisory tomorrow, unless circumstances warrant an earlier bulletin release.