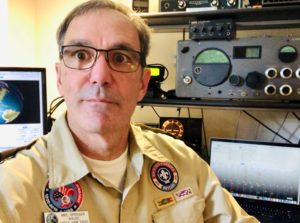 The ARRL Amateur Radio Service to Scouting Award has been awarded to Mike Sprenger W4UOO.  Sprenger, who resides in Valrico in Hillsborough County, is an Extra Class amateur radio operator first licensed in 1992 at the USF Radio and Electronics Club and himself achieved Eagle Scout rank in 1982.  Currently, Sprenger serves as an Assistant Scoutmaster in BSA Troop 686, currently teaches Radio Merit Badge, and is a member of the Tampa Amateur Radio Club and the K2BSA Amateur Radio Association.  Combining a lifelong interest in space and NASA, operating highlights include applying for and operating a successful Shuttle Amateur Radio Experiment (SAREX) 2m radio contact with Dr. Ronald Parise WA4SIR/SK aboard STS-67 in 1995 from the South Florida Museum / Bishop Planetarium enabling 11 middle school students to ask Dr. Parise questions about life in space.  Sprenger has served on staff at two BSA National and one World Scouting Jamboree, which include operating the 2013 National Scouting Jamboree and facilitating a 2 Meter ARISS contact enabling Scouts to speak with Major Luca Parmitano KF5KDP about life aboard the International Space Station.  At the 2019 World Scouting Jamboree, Sprenger operated the NA1WJ telebridge connection to ON4ISS enabling the ARISS contact for 16 Scouts to talk to Astronaut & Scoutmaster Drew Morgan KI5AAA aboard the ISS.  Sprenger in his professional career works as a Production and Digital Event/Webcast strategist and in his spare time can be found enjoying the pace of an Florida AM group QSO with a Hallicrafters SX-43 receiver, that belonged to his uncle Ken Wise who originally held the callsign of W4UOO and is now a silent key, and using a BC-610 transmitter for the ultimate reclined armchair QSO.  Sprenger is also active in his church technology ministry, and plays the bass guitar.

The Amateur Radio Service to Scouting Award was officially established through a resolution that the ARRL Board adopted at its 2013 Annual Meeting. It builds on the long relationship between the BSA and ARRL that began with the development of the Wireless Merit Badge in 1918 and is today Radio Merit Badge.  The League’s award recognizes radio amateurs who, as registered Scouting leaders, make a significant contribution to give Scouts a memorable experience with Amateur Radio.