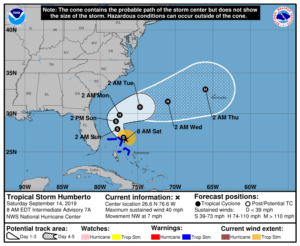 At 800 AM EDT (1200 UTC), the center of Tropical Storm Humberto was located near latitude 26.6 North, longitude 76.6 West. Humberto is moving toward the northwest near 7 mph (11 km/h), and this motion is
expected to continue through tonight. A turn toward the north-northwest is expected by Sunday and a slower northward to northeastward motion is forecast to occur by Monday. On the forecast track, the system will gradually move away from the northwestern Bahamas later today, and then will move well offshore of the east coast of Florida this weekend and early next week.  Maximum sustained winds remain near 40 mph (65 km/h) with higher gusts. Gradual strengthening is forecast, and Humberto is expected to become a hurricane by Sunday night.  Tropical-storm-force winds extend outward up to 90 miles (150 km)to the north and east of the center.  The estimated minimum central pressure just reported by an Air Force reconnaissance plane was 1004 mb (29.65 inches).

The following is an excerpt from the 0500 EDT Forecast Discussion issued by the National Hurricane Center, “During the next few days, a low- to mid-level ridge over the eastern United States and the western Atlantic is expected to slide southeastward, with a weakness in the ridge developing due to a mid- to upper-level trough over the northeastern U.S. This change in the steering pattern should cause the storm to slow down and turn northward off the east coast of Florida in 36 to 48 hours. Subsequently, the northeastern U.S. trough should dig southward, and this change should turn Humberto  northeastward and then eastward away from the U.S. The track guidance has shifted a little more to the east during the first 72 h, and the new NHC track has been nudged eastward as well during this time. The new forecast track lies near the various consensus models…Southwesterly vertical shear and dry air entrainment caused by the upper-level trough to the south is forecast to diminish during the next 2-3 days while Humberto moves near or over the warm waters of the Gulf Stream. This should allow intensification, and Humberto is expected to become a hurricane in about 48 h.”

Since the issuance of the WCF SECTION SPECIAL Bulletin yesterday has significantly changed and for the State of Florida is a much improved outlook.  The following was included in the 1700 EDT Forecast Discussion that was issued yesterday afternoon, “An Air Force plane extensively investigated the disturbance near the Bahamas during the past several hours, and in the last portion of the mission, the crew was able to locate a center of circulation, although weak, near the convection. The center was a little bit to the east of the previous estimates…The track guidance has shifted to the east again, and this shift is larger due to the eastward formation of the center. Consequently, the NHC track forecast was adjusted in that direction, but it remains on the western edge of the guidance envelope.”  The National Hurricane Center discontinued the Tropical Storm Watch with the issuance of the 2300 EDT advisory yesterday evening.

At this time, all ARES, ACS, and CERT personnel should continue to monitor the latest advisories issued by the National Hurricane Center on Tropical Storm Humberto.  There are several more areas of potential development that are active in the Atlantic basin that are being monitored for additional development as we are in the peak of the Atlantic hurricane season.  Due to the significantly reduced threat to the ARRL West Central Florida Section and the State of Florida, the ARRL West Central Florida Section will not activate for Tropical Storm Humberto at this time.