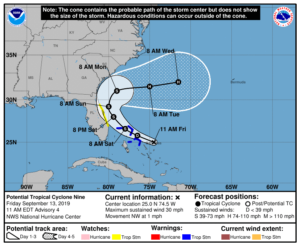 At 1100 AM EDT (1500 UTC), the disturbance was centered near latitude 25.0 North, longitude 74.5 West or about 280 east-southeast of Freeport on Grand Bahama Island. The system is barely moving, but is expected to resume a slow motion toward the northwest and north-northwest later today. On the forecast track, the system is anticipated to move across the central and northwestern Bahamas today, and along or near the east coast of Florida Saturday and Saturday night.  Maximum sustained winds are near 30 mph (45 km/h) with higher gusts. The disturbance is forecast to become a tropical depression or a tropical storm later today or Saturday.  Environmental conditions are favorable for a tropical depression or a tropical storm later today or Saturday.  Formation chance through 48 hours…high…80 percent.  Formation chance through 5 days…high…90 percent.  The estimated minimum central pressure is 1009 mb (29.80 inches).  A Tropical Storm Warning is in effect for the Northwestern Bahamas excluding Andros Island.  A Tropical Storm Watch is in effect for Jupiter Inlet to Flagler-Volusia County line which includes: Martin, St. Lucie, Indian River, Brevard, and Flagler Counties on the Florida east coast.

The following from the Forecast Discussion issued at 1100 EDT for Potential Tropical Cyclone #9 explains the situation well, “The disturbance is embedded within a moderate shear environment, but
this parameter is not expected to be strong enough to halt development. The NHC forecast still calls for this system to become a tropical cyclone later today or Saturday. Global models develop the system and guidance suggests that the cyclone could even reach hurricane intensity by the end of the forecast period. By then, the system is expected to be over the Atlantic well southeast of the coast of the Carolinas. Due to a lack of a well-defined center, the initial motion is highly uncertain. It appears that there has been little motion during the past few hours. A weakness in the ridge over the western
Atlantic is forecast to develop and this pattern should steer the system slowly toward the northwest and then northward. In about 3 days, an eastward moving mid-latitude trough will force the system to recurve away from the coast toward the Atlantic. The guidance has shifted a little to east this morning and consequently the NHC track forecast was adjusted in that direction. However, the official forecast is still on the western edge of the guidance envelope. If the disturbance develops a little more to the east, the track forecast will probably adjusted to the right later today.

At the present time there are no watches or warnings in effect for the ARRL West Central Florida Section counties.  At the present time, ARRL West Central Florida Section ARES will remain at a no activation status until a greater threat from this system emerges and this will be re-evaluated with each advisory.  Please continue to monitor the latest advisories issued by the National Hurricane Center.

The next WCF SECTION SPECIAL BULLETIN is scheduled for release following the 1100 EDT advisory tomorrow, unless conditions warrant a bulletin to be released sooner.