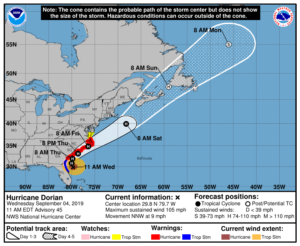 At 1100 AM EDT (1500 UTC), the center of Hurricane Dorian was located about 90 miles east-northeast of Daytona Beach.  Dorian is moving toward the north-northwest near 9 mph (15 km/h) and this motion is expected to continue today. A turn toward the north is
expected tonight, followed by a turn toward the northeast on Thursday. On this track, the core of Hurricane Dorian will move parallel to the Florida east coast and the Georgia coast through tonight. The center of Dorian is forecast to move near or over the
coast of South Carolina and North Carolina Thursday through Friday.  Maximum sustained winds are near 105 mph (165 km/h) with higher gusts. A slow weakening is expected during the next few days.  However, Dorian is expected to remain a powerful hurricane during this time. Hurricane-force winds extend outward up to 70 miles (110 km) from the center and tropical-storm-force winds extend outward up to 175 miles (280 km). NOAA buoy 41008, located off the Georgia coast, recently reported sustained winds of 40 mph (65 km/h) and a wind gust of 47 mph (76 km/h).  The minimum central pressure just reported by an Air Force Reserve
Hurricane Hunter aircraft is 964 mb (28.47 inches).

The following is from the 1100 EDT Forecast Discussion by the National Hurricane Center, “The track guidance is very tightly clustered, and the new forecast track, which has only minor changes from the previous forecast, lies in the center of the guidance envelope near the consensus models. It should be noted that the track is close to and almost parallel to the coast of the southeastern United State, and
any deviation to the left of the track could bring the center onshore anywhere in the Carolinas.  Dorian is expected to remain in an environment of light to moderate vertical wind shear and warm sea surface temperatures during the next 48 h. As a result, the hurricane is expected to maintain Category 2 intensity as it passes near the southeastern United States coast. After 48 h, increasing shear and dry air entrainment should cause a weakening trend. Extratropical transition should begin near the 72 h time, and the cyclone is forecast to become a hurricane-force extratropical low by 96 h near or over Nova Scotia and Newfoundland.  Since the NHC track prediction continues to take Dorian dangerously close to the southeast U.S. coast, all interests from northeast Florida to the Carolinas should remain vigilant to the possibility of experiencing destructive winds, flooding rains, and life-threatening storm surges from this hurricane.”

A Storm Surge Warning remains in effect for coastal Brevard, Volusia, Flager, Duval, and Nassau Counties.  All other Storm Surge watches for the State of Florida are discontinued.  All Hurricane Warnings for the State of Florida have been discontinued.  A Hurricane Watch remains in effect for only the northern portion of St. John’s, Duval, and Nassau Counties, and extends up to the Savannah River in Georgia.  A Tropical Storm Warning remains in effect for Volusia, Flager, St. John’s, Duval, and Nassau County to the Savannah River in Georgia.  All other watches and warnings that are hurricane related have discontinued for the ARRL West Central Florida Section including the Tropical Storm Watch from Polk and Highlands County that were discontinued yesterday evening.