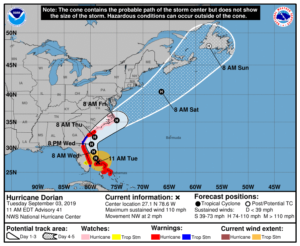 At 1100 AM EDT (1500 UTC), the eye of Hurricane Dorian was located near latitude 27.1 North, longitude 78.6 West. Dorian is moving toward the northwest near 2 mph (4 km/h), and a slightly faster motion toward the northwest or north-northwest is expected
later today and tonight. A turn toward the north is forecast by Wednesday evening, followed by a turn toward the north-northeast Thursday morning. On this track, the core of extremely dangerous Hurricane Dorian will gradually move north of Grand Bahama Island through this evening. The hurricane will then move dangerously close to the Florida east coast late today through Wednesday evening, very near the Georgia and South Carolina coasts Wednesday night and Thursday, and near or over the North Carolina coast late Thursday and Thursday night.  Data from reconnaissance aircraft indicate that the maximum sustained winds are near 110 mph (175 km/h) with higher gusts.  Dorian is expected to remain a powerful hurricane during the next couple of days. Data from aircraft and buoys indicate that the hurricane is growing in size. Hurricane-force winds extend outward up to 60 miles (95 km) from the center and tropical-storm-force winds extend outward up to 175 miles (280 km).  The latest minimum central pressure based on data from Air Force
Reserve and NOAA reconnaissance aircraft is 955 mb (28.20 inches).

According to the latest Forecast Discussion issued by the National Hurricane the following is stated, “As Dorian moves near the east coast of Florida during the next day or two, little overall change in intensity is anticipated. After that time, increasing shear should result in a gradual decrease in the peak wind speed while the hurricane gains latitude and grows in size. The official forecast is in good agreement with the intensity consensus models. The initial motion estimate is 320/2 kt. A shortwave trough moving into the Great Lakes region is forecast by the global models to amplify a deep-layer trough along the  east coast of the United States on Wednesday. This should allow Dorian to begin moving slightly faster toward the north-northwest during the next 36 hours, followed by a northward and then northeastward motion near or over the coasts of South and North Carolina. After moving offshore of the Outer Banks, Dorian should get caught in the mid-latitude westerlies and accelerate northeastward. The NHC track is along the western edge of the interpolated track models through 36 hours, closer to what is depicted in the various global fields. After that time, the official forecast is near a blend of the faster GFS and slower ECMWF models.  Although the official forecast does not show Dorian making landfall along the Florida east coast, the increasing size of Dorian’s wind field along with any deviation to the left of the forecast track will bring hurricane-force winds onshore along portions of the Florida east coast.

Late this morning, the three ARRL Florida Section ARES organizations held another conference call to continue coordination of preparedness activities for amateur radio emergency communications.  Another conference call is scheduled for tomorrow morning following the 1100 EDT advisory to assess the situation at that point.  The online Florida ARES Operator Application is still available if anyone wishes to apply to provide mutual aid outside of their own county, if at a later time that aid may be needed.  The form will state the qualifications necessary to apply.  The form is Google Docs form and is located at Florida ARES Operator Application. At the present time, applications are limited to amateur radio operators in the State of Florida.

The ARRL West Central Florida Section is returning to a Level 3 Activation which is a Stand by level.  Highlands County Emergency Management at approximately 1245 hours gave instructions to close shelters and Highlands County ARES was in the process of standing down.  Hardee County and Polk County EOC’s are in partial activation mode and are not contemplating opening shelters at this time but are standing by in case the need arises to open shelters.  The Florida Tri-Section ARES Net is now in operation on 3950 KHz or 7242 KHz, dependent upon propagation, and another net on statewide SARNET repeater system is in operation.   The hours of these nets may be modified on short notice to fit the situation.  Once the hours change another WCF SECTION SPECIAL BULLETIN will be issued to disseminate those changes.  Ben Henley KI4IGX, our Section Emergency Coordinator, and his staff are continuing to closely monitor the situation and are staying in communications with our local ARES Emergency Coordinators and the State EOC. Our ARES Emergency Coordinators are staying in close communications with their respective Emergency Management offices.

All ARES, ACS, and CERT groups personnel are requested to continue to closely monitor the latest advisories by the National Hurricane Center in Miami.  As we have seen, the risk to the ARRL West Central Florida Section may be reduced, at the moment, but it is by no means past and can change at any time.  All ARES, ACS, and CERT groups should continue to stay in communication with their respective leadership for their groups in case that group is requested to activate. Please do not self-deploy as there is a procedure in place to be considered for deployment.  If you wish to be considered for deployment, you may fill out the Florida ARES Operator at https://docs.google.com/forms/d/e/1FAIpQLSfDALiPFgt8cqPEyvIuY_2jJMgxyN8s_kOZqRBfEhMDOWmPSg/viewform.  The qualifications for deployment are listed on the form.  Once a request is entered into the State EOC system, the three Section Emergency Coordinators working together will go through the lists of applicants to see who can be deployed, as the applicants must meet the qualifications set by the State of Florida Division of Emergency Management.

The next WCF Section Special Bulletin will be issued following the 1100 advisory tomorrow unless conditions warrant a bulletin to be issued sooner.