On Friday February 13, at the Orlando Hamcation and in the middle of the afternoon, the Section Managers and Section Emergency Coordinators of all three ARRL Florida Sections have their first “sit down” meeting with Phil Royce (who is also KE4PWE), the new Communications Branch Director and Bob Little (who is also KK4OAI) Communications Planner, both from the Florida Division of Emergency Management. 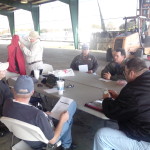 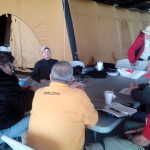 At the meeting, which was held next to the forum rooms at the Hamcation and often humorously interrupted with the sound of a tractor style forklift working nearby, the first agreements were made as to how the State of Florida Emergency Operations Center will interface simultaneously with all three Florida Sections and all 67 County Emergency Operations Center.  The meeting lasted for over an hour and future meetings and less formal gatherings are planned.