Ben is a native of Florida, born on the east coast of Florida but grew up in Highlands County and graduated from Sebring High School in 1987.  Ben has always enjoyed Public Service and started off right after high school doing duty as a volunteer fire fighter in Highlands County, while working for Florida Hospital in Information Technology.  Ben started working for Highlands County Emergency Management in 1998 and has been in his current position of Emergency Management Coordinator since 2000.  Ben also has been over Communications and the 911 department of Highlands County.  Ben also has been a two way radio bench technician for an E.F. Johnson dealer. 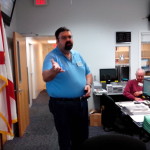