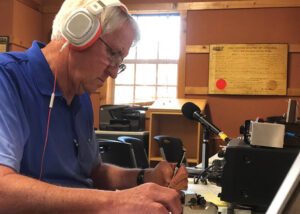 Shreve had been interested in amateur radio as a youth, it was not until 2013 that Shreve received his Technician’s license with the callsign of KK4UGD.  Shreve subsequently upgraded to General in 2014, changed his callsign to his current callsign of N6MRS in 2017, and upgraded to Extra Class in 2019.  Shreve is currently serving as President of the Lakeland Amateur Radio Club, is also active in Polk County ARES, active on several NTS traffic nets, and operates almost exclusively CW on the HF bands.   Shreve has lived in Lakeland since 1989 and is fluent in Spanish. Shrever brings his management and public speaking skills developed over a lifetime to his new position as ARRL Emergency Coordinator.

Shreve retired in 2018 from a thirty-seven year career in international sales management covering Mexico, Central and South America and the Caribbean.  Shreve has been married for 44 years, has three children, and five grandchildren.