Tropical Storm Nicole earlier today finally obtained minimum hurricane status, Category 1, around 1800 EST this evening.  Nicole is currently traveling west and should shortly begin its anticipated turn to the northwest.  Landfall is predicted at the present time to be in Martin County around 0100 to 0200 EST tomorrow morning.  After landfall, Nicole is expected to weaken as it travels across the State of Florida and temporarily entering the Gulf of Mexico from Hernando or Citrus Counties around 1300 EST tomorrow before making a second landfall in either Taylor or Jefferson county around 2000 EST tomorrow evening and then traveling north in Georgia by early Friday morning.  At this point restrengthening in the Gulf of Mexico is unanticipated.  Shortly afterward, Nicole should begin its merger with a trough and become absorbed by that trough. 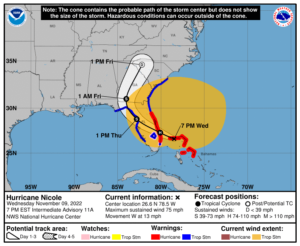 A Hurricane Warning is in effect for…
* The Abacos, Berry Islands, and Grand Bahama Island in the northwestern Bahamas
* Boca Raton to Flagler/Volusia County Line Florida

“The satellite presentation of Nicole has not changed much since late this morning. Curved bands of convection wrap around much of the circulation and there has been a ragged eyewall in radar data from both the Bahamas and Miami. An Air Force Reserve reconnaissance aircraft reported a minimum pressure of 985 mb and peak 850-mb flight-level winds of 72 kt during its final pass through the center and northwestern portion of the storm as Nicole made landfall on Great Abaco Island in the northwestern Bahamas just prior to 1700 UTC. Those aircraft data still supported an intensity of 60 kt, and that remains the initial intensity for this advisory.

Recent center fixes show that Nicole is moving westward or 270 degrees at 11 kt. A mid-level ridge located to the north of the cyclone is expected to shift eastward causing Nicole to turn west-northwestward to northwestward tonight. This motion should bring the center onshore the coast of southeastern or east-central Florida overnight, and across the Florida peninsula Thursday morning. As Nicole passes over north Florida late Thursday, a mid-latitude trough moving into the central United States is expected to turn the cyclone or its remnants northward and then northeastward across inland portions of Georgia and the Carolinas. The dynamical model guidance is in good agreement during the first 12 to 24 hours, with some increase in spread during the recurvature portion of the forecast. The updated NHC track forecast is very similar to the previous advisory through 24 hours, but is slightly west thereafter to be close to the latest consensus aids.

Nicole still has about 12 hours in which to strengthen. Given the slightly improved inner core structure and the warm waters of the Gulf Stream that Nicole will be traversing, the forecast still calls for the cyclone to reach hurricane status before reaching the east coast of Florida. After landfall, weakening should occur as the center cross the Florida peninsula. Even if the center briefly emerges over the extreme northeastern Gulf of Mexico, re-intensification is not expected. Nicole is forecast to weaken further over the southeastern United Sates, and then dissipate along a frontal zone moving into the eastern United States by 60 hours.”

At the present time, Tropical Storm Warnings are in effect for all counties in the ARRL West Central Florida Section.  Polk, Hardee, Highlands, and Desoto Counties.  A Storm Surge Warning has been issued for Coastal Pasco County.

At the present time, Hillsborough County ARES/RACES is staffing a special needs shelter.  Hardee County ARES and Highlands County ARES are staffing shelters in their respective counties.  Other ARES groups are monitoring their situations carefully in case they are requested to activate.  There was no other information on ARES activations available at press time.

Due to activations of three counties, the ARRL West Central Florida Section ARES Alert Level went to a Level 2, which is a partial activation, at 1800 EST, earlier this evening.