Tropical Storm Fred weakened over night into a Tropical Depression due to land interaction when it crossed Hispanola. 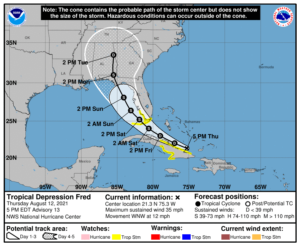 “Fred remains poorly organized at this time. While the low-level circulation looks more closed than it did earlier, the center is broad and may have multiple vortices rotating around it. Also, while convection has increased from earlier today, there is only minimal convection near the center and little evidence of banding.  The initial intensity remains 30 kt, with those winds likely occurring in squalls to the northeast of the center.

Fred has slowed its forward speed, with the initial motion now 295/10. There is little change to the track forecast philosophy from the previous advisory. The subtropical ridge to the northeast should steer Fred west-northwestward for the first 24-36 h, followed
by a turn toward the northwest as the cyclone approaches the western periphery of the ridge. By 96-120 h, a northward motion is expected as Fred moves into a weakness in the ridge. The track guidance has shifted westward since the previous advisory, most notably after about 24 h. Thus, that portion of the new forecast track has also been nudged a little westward, but it still lies to the east of the various consensus models.

Fred remains in an environment of about 20 kt of westerly vertical wind shear. The shear is expected to persist during the next day or so, and this combined with the current disorganization of the system should prevent significant strengthening during that time. After that, there remains disagreement between the global models on the evolution of the upper-level trough over Florida and the upper-level anticyclone southeast of Fred. Some shear is likely to continue, but there may be a period of more conducive conditions from 36-72 h.  The new intensity forecast is similar to the previous one in calling for slow strengthening through the first 36 h, with a little faster strengthening from 36-72 h. With that being said, the forecast 45-kt peak intensity is near the high end of the intensity guidance.”

A Tropical Storm Watch was issued this afternoon for coastal Collier, coastal Monroe including the western part of the Florida Keys.    At the present time there are no watches or warnings for the ARRL West Central Florida Section.