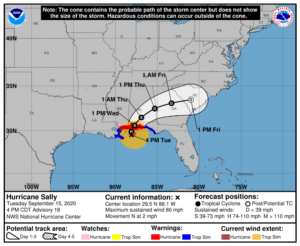 A Hurricane Warning is in effect for…
* East of Bay St. Louis to Navarre Florida

The following excerpts are from the Forecast Discussion issued at 1700 EDT today, “Sally has been inching its way toward the north-central Gulf Coast today. The overall structure of the storm has remained about the same during the day with a large ragged eye in apparent in radar
imagery. A NOAA P-3 aircraft that has been sampling the storm since late this morning has reported peak flight-level winds of 76 kt, and NWS Doppler radar has shown velocities of 75-80 kt at around 7000 ft. The intensity was reduced to 70 kt on the 1800 UTC intermediate advisory and remains at that value for this advisory.

Radar and aircraft fixes show that Sally has been moving very slowly toward the north or 350/2 kt. The track forecast philosophy remains
unchanged from the previous advisory. Sally is currently located within an area of weak steering flow between a couple of mid-level ridges to its east and west. A weak mid-level trough over the south-central United States is forecast to slide eastward over the next few days, which should cause Sally to turn north-northeastward and then northeastward over the next 24-36 hours. Sally’s forward speed is expected to remain quite slow over the next 24-48 hours, but the guidance has trended slightly faster after that time. The slow forward speed is likely to result in a historical rainfall event for the north-central Gulf Coast. It may sound like a broken record, but the track guidance has again shifted eastward during the first 24-36 hours, and the NHC forecast has been adjusted accordingly. Since Sally has a large wind field, and storm surge and rainfall hazards extend far from the eye, users should not focus on the exact forecast track or specific location and timing of landfall as strong winds and bands of heavy rainfall are already affecting the Gulf Coast and will continue to do so for quite some time.

The combination of upwelling and moderate westerly shear is likely to result in little change in strength prior to Sally moving onshore. Once the center of the hurricane moves onshore, rapid weakening is expected and the global models indicate that the circulation will becoming elongated along a frontal boundary in 3 to 4 days.”

The only warnings in effect for the ARRL West Central Florida Section are Flood Warnings in effect for portions of the Peace River in Polk County near Bartow, the Myakka River at Myakka River State Park in Sarasota County, and Cypress Creek at State Road 54 Worthington Gardens which will affect Pasco County.  These are from the recent rains from when Hurricane Sally passed by over the weekend and on Monday.

The threat from Hurricane Sally have been tremendously diminished to the ARRL West Central Florida Section.   Everyone should continue monitoring the latest advisories issued four times a day by the National Hurricane Center and for any further watches and or warnings issued by the National Weather Service office in Ruskin.

This will be the last WCF SECTION SPECIAL BULLETIN on Hurricane Sally unless conditions dramatically change and the threat to the ARRL West Central Florida Section is once again increased.