Subtropical Storm Nicole earlier today obtained full tropical characteristics now that it has convection near the center and is now Tropical Storm Nicole.  Nicole is expected to continue westward, then slightly southwestward in response to high pressure to the north, and then with an approaching cold front and trough, will eventually turn to the north and then northeast.  The timing of the high pressure moving out and the arrival of next trough and cold front will determine the final path of Nicole. 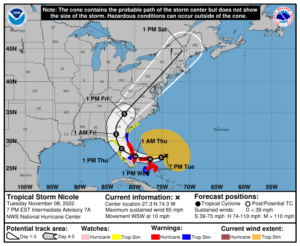 A Hurricane Warning is in effect for…
* The Abacos, Berry Islands, Bimini, and Grand Bahama Island in the northwestern Bahamas
* Boca Raton to Flagler/Volusia County Line Florida

A Storm Surge Warning is in effect for…
* North Palm Beach Florida to Altamaha Sound Georgia
* Mouth of the St. Johns River to Georgetown Florida

“Satellite imagery indicates that the central convection associated with Nicole has become better organized this afternoon, with a curved convective band wrapped about three-quarters of the wayaround the center. An earlier scatterometer overpass showed winds
near 45 kt about 60 n mi northwest of the center, and a just received microwave overpass shows an additional increase in organization. Based on these data, the initial intensity is
increased to 55 kt. Water vapor and air mass imagery shows a large area of mid- to upper-level dry air over the southern semicircle of the circulation, and some of this may be entraining into the core at this time.

Nicole is continuing its anticipated turn with the initial motion now 260/9. A strong deep-layer ridge over the eastern United States should steer the storm west-southwestward during the next 24-30 h, with this motion bringing the center near or over the Northwestern Bahamas. After that time, the ridge is forecast to shift eastward allowing Nicole to turn westward to west-northwestward as it approaches the east coast of Florida.
There is some spread in the guidance as to how much of a turn will occur, with the ECMWF and GFS showing a more westward motion, while the HWRF and HMON show a more northwestward motion. This part of the forecast track is along the south edge of the guidance and agreement with the ECMWF and UKMET. After landfall in Florida, Nicole should turn generally northwestward, with the center forecast to pass near or over the west coast of Florida north of Tampa by about 48 h. This should be followed by a turn toward the north and northeast through the eastern United States as the cyclone
recurves on the east side of a large baroclinic trough moving through the central United States. This part of the forecast track is closer to the various consensus models, and overall the new forecast track is a little south of the previous track through 60 h
and a little west of the previous track after that time.

Nicole will be traversing relatively warm SSTs of 27-28 degrees Celsius and upper-level conditions, while not ideal due to a nearby upper-level trough, are expected to allow some strengthening before the cyclone reaches Florida. The new intensity forecast follows the
previous forecast and calls for Nicole to become a hurricane when it is near the northwest Bahamas and remain a hurricane when it reaches Florida. This part of the intensity forecast is at the high end of the intensity guidance. Weakening is expected after Nicole moves inland over Florida and while it accelerates northeastward over the southeastern United States. Extratropical transition is expected to start between 60-72 h and be complete by 96 h, with the storm likely to maintain gale-force winds after transition. The cyclone is expected to dissipate as it merges with another mid-latitude low pressure area by 120 h.”

Hillsborough County ARES/RACES has gone to a Level 3 activation as they have been  requested to stand by to provide communications for some shelters.  Hardee County ARES has been requested to provide communications for one shelter and the EOC, starting tomorrow.  Other ARES groups are monitoring their situations carefully in case they are requested to activate.  There was no other information on ARES activations available at press time.