Hurricane Ian is forecast to continue strengthening into a Category 3, which makes it a major hurricane, on Tuesday morning.  Ian is now moving northwest and will make landfall on the west side of Cuba early tomorrow morning and emerge into the Gulf of Mexico tomorrow afternoon.  Then, Ian will begin its journey towards the Florida west coast where it will eventually will run somewhat parallel with the Florida west coast and make landfall in the proximity of Hernando and Citrus County late on Thursday or early on Friday. 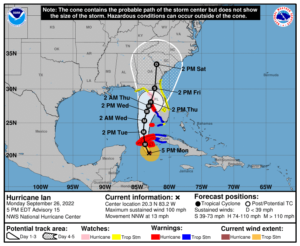 “Ian continues to strengthen over the northwestern Caribbean Sea. The last report from the Air Force Hurricane Hunters around 1630 UTC found 700-mb flight-level winds of 79 kt. The inner core appears better organized, and the eyewall structure has greatly improved in radar imagery from the Cayman Islands. The 18 UTC satellite classifications from SAB and TAFB were a consensus T4.5/77 kt, but the continued improvement in satellite structure warrants raising the initial intensity to 85 kt for this advisory.

Atmospheric and oceanic conditions remain very favorable for additional intensification during the next 24 h or so, as Ian moves over the very warm waters of the northwestern Caribbean Sea and the southeastern Gulf of Mexico while the shear remains quite low. The
NHC intensity forecast calls for Ian to become a major hurricane before it reaches western Cuba early Tuesday. It is then forecast to reach its peak intensity over the southeastern Gulf of Mexico in 36 h. After that, southwesterly shear in association with a deep-layer
trough over the eastern U.S. is forecast to significantly increase over the hurricane on Wednesday and Thursday, which will likely disrupt the vertical structure and import drier air into its circulation. Despite these less favorable conditions, Ian is still forecast to remain at or near major hurricane strength as it passes near the west-central coast of Florida on Wednesday and Thursday.  The NHC intensity forecast agrees well with the latest IVCN and HCCA aids.

Ian has made an expected turn toward the north-northwest, and its initial motion is 330/11 kt. The hurricane will move north-northwestward to northward over the next day or so as it is steered by a mid-level ridge to the east. A turn to the north-northeast with a decrease in forward speed is forecast on Wednesday and Thursday as the center of Ian moves near the west coast of Florida. The slower forward motion is likely to prolong the
storm surge, wind, and rainfall impacts, especially along the west coast of Florida. The latest track guidance has come into better agreement on this scenario, although it is noted that small deviations to the shore-parallel track could have large implications on the impacts at particular locations along the west coast of Florida. The NHC track forecast has again been adjusted slightly eastward at 48-72 h, which follows the latest trends in the global model guidance and lies near but just west of the multi-model consensus aids.

Based on the latest forecast and timing of expected impacts, Hurricane and Storm Surge Warnings have been issued along the west coast of Florida.”

The ARRL West Central Florida Section ARES remains at a Level 2 Alert, as several ARES groups in the section were activated this morning and some of these groups will go to full activation tomorrow.

The following activations of the following ARES groups were at the requests of their respective Emergency Management agencies:

All ARES, ACS, and CERT personnel are encouraged to continue to check each advisory issued by the National Hurricane Center in Miami and the Tropical Weather Outlook issued four times daily by the National Hurricane Center.  All ARES, ACS, and CERT personnel should bring to completion any preparedness activities by Tuesday evening, and stay in communication with their respective leadership, in case of activation.  We have been reminded that we DO NOT SELF ACTIVATE.  Please wait for permission to activate from your respective chains of command.

Arc Thames W4CPD, Section Emergency Coordinator – Northern Florida Section, has been designated as the liaison between Florida Tri-Section ARES and the Florida Division of Emergency Management.  The following webpage has information on a couple of upcoming opportunities to volunteer and qualifications to volunteer:  http://arrlwcf.org/wcf-section-programs/ares/hurricane-ian-service-requests/.  Please, DO NOT SELF ACTIVATE.  Any such volunteers will be contacted and authorized if they are to proceed.

Arc Thames W4CPD also announced today, that tomorrow evening at 2000 EDT, will commence Florida Tri-Section ARES Net on either 3940 KHz or 3950 KHz.  The purpose of this net will be to provide HF communications to the State EOC.  The tentative schedule for now will be from:

The next WCF SECTION SPECIAL BULLETIN for Tropical Storm Ian will be issued tomorrow following the 0800 EDT advisory, unless conditions warrant a sooner bulletin.