Tropical Storm Ian became Hurricane Ian in the early morning hours.  Ian is forecast to continue strengthening into a Category 3, which makes it a major hurricane, on Tuesday morning.  Also Ian is now moving northwest and eventually to the north.  Also the National Hurricane Center has brought up Hurricane Watches and Tropical Storm Watches for much of the ARRL West Central Florida Section.  Therefore we are issuing this unscheduled special bulletin due to all the changes  We will dealing with Ian for most of this week, so this will not be a quick “ride” to say the least. 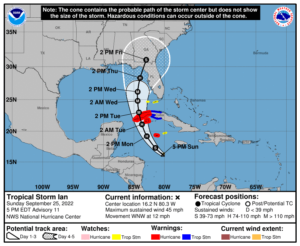 “The satellite presentation of Ian has improved this morning. Deep convection has increased within the inner core during the pastseveral hours, with an expanding central dense overcast noted in recent satellite imagery. The inner core structure continues to take shape in radar data, although the eyewall still has a banded appearance and remains open on the west side. Dropsonde data from the NOAA and Air Force Hurricane Hunter aircraft indicate that the minimum pressure has gradually fallen to about 980 mb, and the
initial intensity is raised slightly to 70 kt for this advisory.

The intensity of Ian has increased by 30 kt during the past 18 h.  Further rapid intensification (RI) is expected during the next 24-36 h as Ian crosses the high oceanic heat content of the northwestern Caribbean Sea within a very low vertical wind shear (VWS) environment. The latest SHIPS-RI probabilities continue to highlight the high likelihood of this scenario, with a 73 percent chance of a 35-kt wind speed increase in 24 h and a 79 percent chance of a 45-kt increase in 36 h. The NHC intensity forecast is similar to the previous one, and it shows Ian becoming a major hurricane by the time it reaches western Cuba. Ian is forecast to reach its peak intensity in 36 h over the southeastern Gulf of Mexico. Then, increasing southwesterly shear by 36-48 h is expected to bring an end to the intensification phase. The combination of strong VWS and drier mid-level air will induce weakening thereafter, but Ian is expected to remain at or near major hurricane strength as it passes near the west-central coast of Florida on Wednesday and Thursday.

Ian continues to move northwestward at 325/11 kt. A turn toward the north-northwest and north is expected during the next day or so as the hurricane moves around the western extent of a mid-level ridge. Then, an upper-level trough over the eastern U.S. should cause Ian to turn more north-northeastward through Thursday. This track brings
the center of Ian close to the west-central coast of Florida during the middle of the week. An even greater concern is the slower forward motion that is forecast during this period, as the upper trough passes north and east of Ian and the steering currents weaken. This would likely prolong the storm surge, wind, and rainfall impacts along the affected portions of the west coast of Florida, although the roughly shore-parallel track still makes it
difficult to pinpoint exactly what locations will experience the most severe impacts. The track guidance has come into better agreement during the first 72 h of the forecast period, and only a minor eastward adjustment was made to the NHC track forecast in line
with the multi-model consensus aids.

The aircraft data indicate that the 34-kt wind radii in the northeastern quadrant were 20-30 n mi larger than previously estimated, and this has been reflected in the latest forecast.  Based on these changes, Tropical Storm Watches have been issued for
the middle Florida Keys and extended southward along the southwestern coast of Florida.”

As of 1200 EDT today, ARRL West Central Florida Section ARES has moved to a Level 2 Alert, as several ARES groups in the section were activated this morning and some of these groups will go to full activation tomorrow.

The following activations of the following ARES groups were at the requests of their respective Emergency Management agencies:

Several other ARES groups will be advised later today as to whether they will be activated or continue on stand by status by their respective served agencies.  All other ARES groups in the remainder of the ARRL West Central Florida Section are at a Level 3 activation for the time being.

All ARES, ACS, and CERT personnel are encouraged to continue to check each advisory issued by the National Hurricane Center in Miami and the Tropical Weather Outlook issued four times daily by the National Hurricane Center.  All ARES, ACS, and CERT personnel should bring to completion any personal preparedness activities by the end of the day, if possible, and stay in communication with their respective leadership, in case of activation.  We have been reminded that we DO NOT SELF ACTIVATE.  Please wait for permission to activate from your respective chains of command.

Arc Thames W4CPD, Section Emergency Coordinator – Northern Florida Section, has been designated as the liaison between Florida Tri-Section ARES and the Florida Division of Emergency Management.  The following webpage has information on a couple of upcoming opportunities to volunteer and qualifications to volunteer:  http://arrlwcf.org/wcf-section-programs/ares/hurricane-ian-service-requests/.  Please, DO NOT SELF ACTIVATE.  Any such volunteers will be contacted and authorized if they are to proceed.

The next WCF SECTION SPECIAL BULLETIN for Tropical Storm Ian will be issued tomorrow following the 1700 EDT advisory, unless conditions warrant a sooner bulletin.