At 0500 EDT this morning, Invest 98L, which had been heading on a west to west-northwest track through the southern Caribbean Sea, finally acquired full tropical characteristics and the National Hurricane Center declared Invest 98L to be Tropical Depression Nine.

As a result of the formation of Tropical Depression #9 and the projected path very possibility having an impact on the ARRL West Central Florida Section and the State of Florida as a whole, daily WCF SECTION SPECIAL BULLETINS are now initiated and will continue dissemination until the threat from Tropical Depression #9, which is currently forecast to eventually become Tropical Storm Ian, is abated. 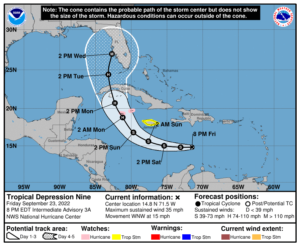 A Hurricane Watch is in effect for…
* Cayman Islands

A Tropical Storm Watch is in effect for…
* Jamaica

“The organization of the depression has slightly improved since this morning. The low-level center has been decoupled from the deep convection for much of the day, but in recent satellite imagery it appears the center may be drawing closer to a more recent burst of convective activity. Unfortunately, earlier scatterometer data missed the center of the cyclone, and the satellite intensity estimates still range from 25-35 kt. The initial intensity is held at 30 kt for this advisory, and an Air Force Hurricane Hunter aircraft is on its way to investigate the system this evening.

The system is still moving west-northwestward at 290/13 kt, but it is expected to turn westward tonight and continue on that heading through Saturday as a ridge develops to its north. Then, a deep-layer trough over the eastern U.S. is forecast to erode the ridge into early next week. This should result in a turn toward the northwest and north-northwest while the cyclone passes near the Cayman Islands early Monday and approaches western Cuba Monday night. Once again, the global models have shifted westward this cycle during this period, and there remains increased track uncertainty late in the forecast period once the cyclone emerges into the southeastern Gulf of Mexico. The latest NHC track forecast has been adjusted westward from 48-120 h, and it lies near or slightly east of the latest track consensus aids.

Recent satellite trends suggest the cyclone may already be nearing a lower shear environment, and once that occurs, the atmospheric and oceanic conditions appear very conducive for strengthening through early next week. As the cyclone moves within a moist and unstable environment over sea-surface temperatures greater than 30 deg C, it is forecast to rapidly intensify over the northwestern Caribbean Sea and continue strengthening while it approaches western Cuba on Monday night. The very warm waters of the southeastern Gulf of Mexico should allow for more strengthening once it crosses Cuba, and the NHC forecast once again shows the system approaching the Florida peninsula as a major hurricane by the middle of next week.

Several ARES groups are already on standby status in case they are requested to activate by their local Emergency Management agencies.  All ARES, ACS, and CERT personnel are encouraged to continue to check each advisory issued by the National Hurricane Center in Miami and the Tropical Weather Outlook issued four times daily by the National Hurricane Center.  All ARES, ACS, and CERT personnel should bring to completion any personal preparedness activities as soon as possible and stay in communication with their respective leadership, in case of activation.

The next WCF SECTION SPECIAL BULLETIN for Tropical Depression Nine will be issued tomorrow following the 1700 EDT advisory, unless conditions warrant a sooner bulletin.