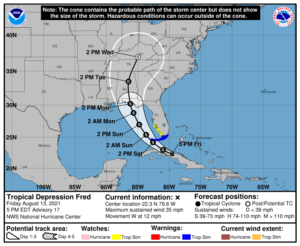 “Although there has been a general increase in convection associated with Fred since this morning, the system remains disorganized with the low-level center moving farther inland over central Cuba. Earlier ASCAT data detected an area of 25-27 kt winds over water to the northeast of the center, and based on that data, the initial intensity is held at 30 kt, which could be a little generous.

Since the previous advisory, Fred has been moving nearly due westward, but the longer-term motion is estimated to be 280/10 kt.  The cyclone is nearing the western periphery of a subtropical ridge that is centered over the western Atlantic. This should cause Fred
to turn west-northwestward tonight, and then northwestward on Saturday. The latest interpolated guidance that was initialized with the more southward and westward 18Z initial position shows a wider or more gradual northwestward turn, and therefore has shifted significantly westward, especially in the short term. However, the global models fields track the 850-mb vorticity center more along the northern coast of Cuba and some of those models suggest a center re-formation could occur on Saturday near the north coast of Cuba or over the Straits of Florida. As a result, the first 24-36 hours of the track forecast has been adjusted about a degree westward, but it is not as far west as the trackers, leaving open the possibility that a center re-formation could occur. After that time, the NHC forecast lies along the eastern side of the guidance envelope in best agreement with the 12Z GFS. Some additional westward adjustments may be necessary until the track guidance stabilizes. It is worth noting that it isn’t too surprising to see these type of models shifts with a system that remains quite disorganized.

Fred remains within an area of moderate southwesterly vertical wind shear, and the model guidance generally indicates that this shear will continue during the next day or so. Since it will also take time for the system to recover after its passage over Cuba, only gradual strengthening is indicated during the next day or two. After that time, the system could be in a somewhat more favorable environment, and the NHC intensity forecast calls for some
strengthening until Fred reaches the northern Gulf Coast, which now doesn’t occur until around 72 hours with the wider turn shown in the track forecast. The NHC intensity forecast lies between the various consensus aids, the statistical guidance, and the HWRF
model, which all generally show the system peaking in 60-72 hours.  The intensity forecast remains of lower-than-normal confidence due to Fred’s continued interaction with land.

Users are reminded to not focus on the exact forecast track as heavy rainfall, gusty winds, and a chance of tornadoes will extend far to northeast and east of the center, and those hazards are likely to still affect portions of the Florida peninsula, despite the recent shift in the forecast track.”