Tropical Depression Marco, which was the near the Louisiana coastline yesterday lost nearly all of its convection and showed signs of opening up into an elongated area of low pressure.  As a result the National Hurricane Center issued its last advisory at 0500 EDT today on Tropical Depression Marco as the cyclone no longer meet the criteria of a tropical cyclone.  Now Hurricane Laura is once again alone in the Gulf of Mexico. 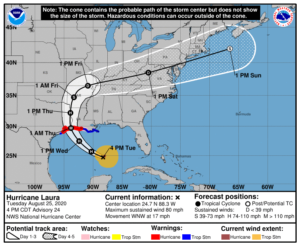 A Storm Surge Watch is in effect for…
* Freeport Texas to San Luis Pass
* Mouth of the Mississippi River to Ocean Springs Mississippi
* Lake Pontchartrain, Lake Maurepas, and Lake Borgne

The following excerpts are from the Forecast Discussion issued at 1700 EDT today, “Satellite imagery shows some changes in the convective pattern of Laura since the last advisory. The ragged central dense overcast seen earlier has been replaced by a curved convective band that
wraps almost all the way around a cloud-filled banding-type eve. One possible reason for this change is that the imagery also suggests a
tongue of dry air is trying to entrain into the cyclone just west of the central convection. Aircraft data received after the last advisory did not show any fall in the central pressure, but did have high enough flight-level and SFMR winds to justify nudging the initial intensity up to 70 kt.

The initial motion is now west-northwestward or 300/15 kt. There is no change in the forecast philosophy since the last advisory. The hurricane is currently on the south side of a large-deep layer ridge over the southeastern United States, and it is moving toward a break in the ridge caused by mid- to -upper-level troughing over Texas and the southern Great Plains. The current and forecast synoptic pattern should steer Laura west-northwestward this evening, followed by a turn toward the northwest tonight and toward the north by Wednesday night and Thursday. This will result in the hurricane making landfall in the area of southwestern Louisiana or the upper Texas coast late Wednesday night or Thursday morning. The new forecast track has a slight eastward nudge during the first 12-24 h, but the landfall position is almost unchanged from that of the previous forecast. It should the be noted that the current forecast track lies to the east of the ECMWF and UKMET models, so it is still
possible that the forecast track could nudge westward in later advisories. After landfall, Laura is expected to recurve into the westerlies and move eastward through the Tennessee Valley and the mid-Atlantic States before reaching the Atlantic in about 120 h.”

At the present time all Tropical Storm Watches and Tropical Storm Warnings for the entire State of Florida have been discontinued due to Hurricane Laura heading away from the State of Florida.  Hurricane Laura will make landfall most likely in either the eastern Texas or western Louisiana coastline late tomorrow evening or early on Thursday morning.

Everyone should continue or resume their normal monitoring of the latest Tropical Weather Outlook issued four times a day by the National Hurricane Center and continue to monitor the latest advisories on Hurricane Laura.  The Hurricane Watch Net will activate tomorrow morning on 14325 KHz and or 7268 KHz to receive weather reports of interest to the National Hurricane Center and relay of any emergency or priority traffic.  For more information go to the following ARRL News Release:  http://www.arrl.org/news/hurricane-watch-net-firms-up-wednesday-activation-plans.

Due to the threat to the State of Florida being diminished from Hurricane Laura, this will be the final WCF SECTION PRESS RELEASE on Hurricane Laura unless conditions warrant resumption of these press releases.