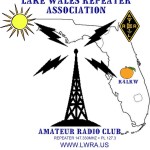 On Friday August 7th, the Lake Wales Radio Amateurs, or LWRA as their club is often called, was approved to be an ARRL Special Service Club.

The Lake Wales Radio Amateurs, formerly and still sometimes known as the Lake Wales Repeater Association, was founded in 1974 and put on the air one of the first 2 Meter repeaters in Central Florida.  Originally it was on 146.790 MHz, but in 1976 was changed to 147.330 MHz where it has operated since that time.  The vanity call of K4LKW was obtained by the club in 2006.

The Lake Wales Radio Amateurs became an ARRL Affiliated Club in 2011 and are involved in doing the following regularly:  VE test sessions, radio expeditions, Field Day, and SPAR Winter Field Day.  The club has a weekly ragchew and traders net and has a monthly membership meeting on the 2nd Thursday of every month in downtown Lake Wales.  For more information about the club you may go to http://www.lwra.us/