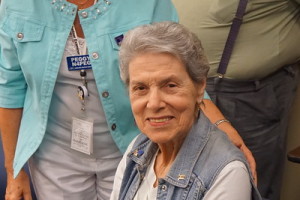 PURPOSE OF THE WHITE AWARD

To recognize the radio amateur who has made the most significant contributions to amateur radio in the West Central Florida Section for the year of the nomination.

RECIPIENTS OF THE WHITE AWARD

NOMINATIONS AND SELECTION PROCESS FOR THE WHITE AWARD:

HISTORY OF THE WHITE AWARD

The award was proposed by Assistant Section Manager Biff Crane K4LAW in early 2016.  Biff proposed the idea that there should be an award to recognize an amateur radio operator each year that had made the most significant contributions to amateur radio for that year.  Biff proposed that the award should be called “The White Award” in honor of Ellen White W1YL, who had been Section Communications Manager in the San Diego Section in the early 1950’s and had worked at ARRL Headquarters in Newington, CT, in the DXCC bureau and in several other positions for over 20 years, and that she should be the first recipient.  On December 9, 2016, Darrell Davis KT4WX, Section Manager, presented Ellen White W1YL, with the 1st Annual White Award at the ARRL table as she could not be present for the ARRL forum later in the day.