Eta made landfall early this morning (0400 EST) near Cedar Key, crossed the Florida Peninsula, and exited the east coast early this afternoon (approximately 13000 EST) near the Florida – Georgia border.   Eta is expected to continue north-northeast and accelerate in forward speed along a frontal boundary and to be either absorbed by a trough ahead of the next cold front or transition to an extratropical area of low pressure in the next 24 to 48 hours. 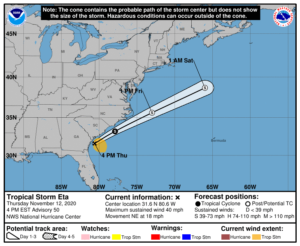 There are no coastal watches or warnings in effect.  All watches and warnings were discontinued at 1300 EST today.

The following excerpts are from the Forecast Discussion issued at 1600 EST today, “Satellite imagery and surface observations indicate that the center of Eta moved off the Georgia coast around 18z, a little farther north than previously anticipated. The satellite presentation of the storm has become quite ragged with the primary convective band located well east of the center. The circulation has also become more elongated, with the strongest winds occurring east of the center over the Atlantic waters. Based on the continued degradation of Eta’s organization, the initial wind speed has been lowered to 35 kt. Little change in strength is anticipated through early Friday due to moderate to strong westerly shear. The UKMET and ECMWF models continue to show some re-intensification of the system as an extratropical low by late Friday, and that is what is indicated in the official foreast. A plausible alternative scenario that is favored by the GFS is for the circulation to become elongated and dissipate along an approaching frontal boundary on Friday.

Eta is moving northeastward at about 16 kt. The cyclone should continue to accelerate northeastward over the next day or so ahead of a mid-latitude trough that is forecast to move across the Great Lakes Region and approach the northeastern United States on Friday. Only slight modifications to the previous official forecast were required, and the new NHC track forecast is near the middle of the tightly clustered dynamical models.

Deep-layer moisture that has spread northward along a frontal boundary across portions of eastern North Carolina and theMid-Atlantic coast is producing heavy rainfall and flash flooding that is not directly associated with Eta. See products from the NOAA Weather Prediction Center and your local National Weather Service office for additional information.”

Hillsborough County ARES/RACES and Pinellas ARES/ACS, who had been activated for Tropical Storm Eta for nearly 24 hours, deactivated all operations this morning.  Other ARES groups that had been on standby have also stood down.   As a result, the ARRL West Central Florida Section Level 2 activation was discontinued at 1600 EST today.

Everyone is highly encouraged to continue monitoring the latest Tropical Weather Outlooks and or any advisories issued by the National Hurricane Center in Miami.  There is an area of disturbed weather currently in the southern Caribbean Sea that will need to be monitored.

This will be the last WCF SECTION SPECIAL BULLETIN on Tropical Storm Eta. 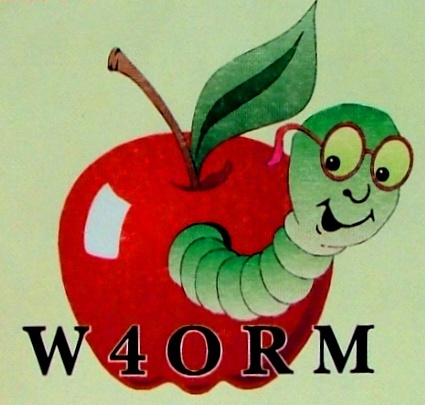 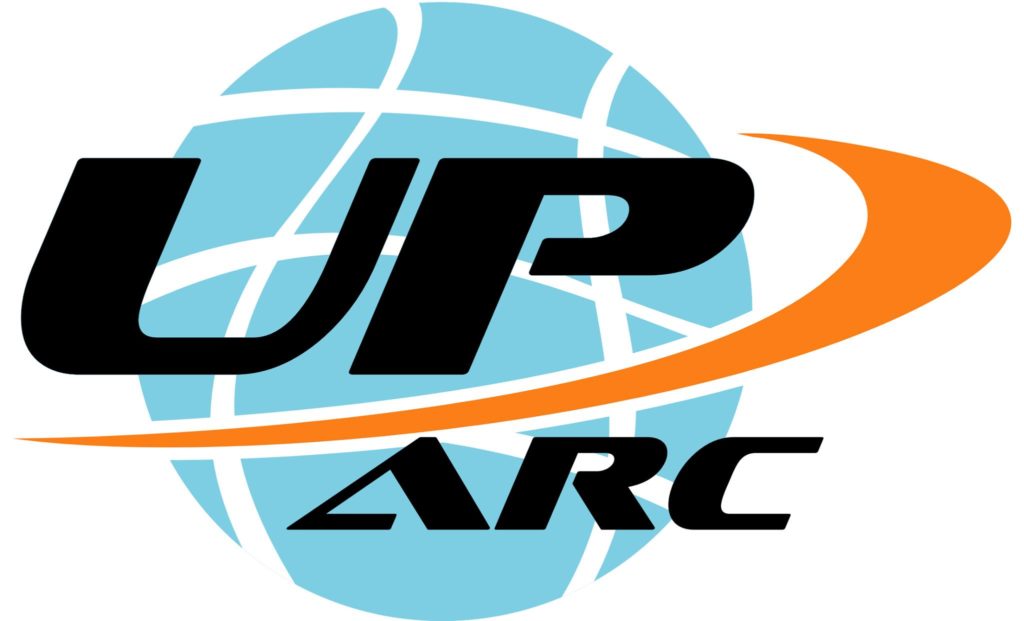