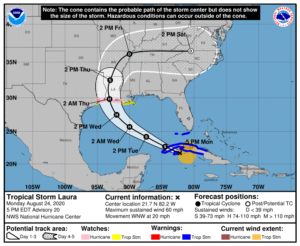 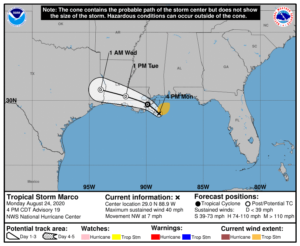 The following is excerpts from the Forecast Discussion at 1700 EDT, “The satellite presentation of the tropical storm has improved
somewhat with deep convection remaining over the center, and an increase in banding over the southeastern portion of the circulation. Earlier aircraft and scatterometer data, however, indicated that there has been little change in strength today, and the initial intensity remains 50 kt. These observations have shown the the stronger winds are located in the convective band well east and southeast of the center, and that the system currently lacks an inner core. This is likely the reason that Laura has not been able to strengthen while it has moved over water today. Theaircraft also reported a fairly stable minimum pressure of 1001-1003 mb during its mission this morning and early afternoon.

The intensity forecast philosophy remains the same as the previous advisory. Once Laura moves over the southeastern Gulf of Mexico tonight, a combination of warm sea surface temperatures and low vertical wind shear should allow for steady strengthening. The latest iterations of the global and regional hurricane models continue to show significant deepening while Laura traverses the Gulf of Mexico, and a period or rapid strengthening is possible once an inner core is able to organize. The statistical guidance is again on the lower side of the intensity forecast envelope while the HWRF and CTCI models bringing Laura to major hurricane strength. The NHC intensity forecast is again between these
solutions and is close to the consensus aids.

The initial motion estimate is 290/16 kt. A deep-layer ridge over the western Atlantic is expected to build westward during the next day or so. By early Wednesday, a mid- to upper-level trough over the south-central United States is forecast to erode the western portion of the ridge, which should cause Laura to turn northwestward and then northward toward the northwestern Gulf coast. After landfall, Laura or its remnants are expected to become embedded in the mid-latitude westerlies and recurve over the eastern U.S.on days 4 and 5.”

At the present time Tropical Storm Warnings are in effect for the Florida Keys from Craig Key to Key West and the Dry Tortugas in the State of Florida as Laura is due to pass close to the Florida Keys on Tuesday before heading in the the central and western Gulf of Mexico away from the State of Florida for eventual landfall most likely on the western coast of Louisiana on Thursday.

As of press time, there are no requests for activation from any of our served agencies in the ten counties of the ARRL West Central Florida Section.  Manatee County ARES returned to a no activation status from a Level 3 activation (stand by) due to any requests for assistance not being anticipated for this incident.  All ARES, ACS, and CERT personnel should continue to monitor the latest National Hurricane Center advisories on Tropical Storm Laura while the storm is in close proximity to the State of Florida.